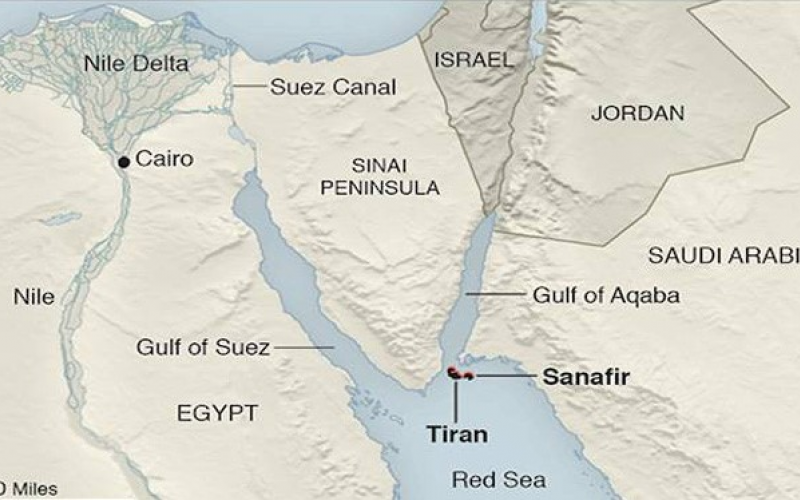 As early as 1954, Egypt claimed its sovereignty over Tiran and Sanafir before the United Nations Security Council, stating that the islands were part of the delimitation of territory dividing Egypt from the Ottoman Empire in 1906. The decision to hand over the two islands is clearly related to the financial support provided by Riyadh to Egypt in recent years.

Saudi Arabia has been given two islands which have been under Egyptian control since the early 20th century.

President Abdel Fattah el-Sisi has endorsed the transfer of ownership of Tiran and Sanafir located on the southern edge of the Gulf of Aqaba.

The ceding of the two islands has prompted protests in Egypt since March 2016 when the idea was first made public by El-Sisi. An Egyptian Supreme Court decision rejected the proposal to relinquish ownership of the islands to Saudi Arabia ruling that Sanafir and Tiran were part of its national territory.

However, in June, the majority in the Parliament of Egypt sided with El-Sisi sending the legislation to the president for ratification. El-Sisi maintains that Egypt will still administer the islands although ownership will be turned over to Saudi Arabia.

Former Egyptian leaders Mohamed Naguib, Gamal Abdel Nasser and the other Free Officers, took control of the government on July 23, 1952 overthrowing the monarchy. After consolidating power in 1954 with the removal of Naguib who was a member of the Muslim Brotherhood, Nasser two years later in 1956 nationalized the Suez Canal Company, which was controlled by Britain and France.

In the immediate aftermath of the seizure of the canal, Egypt was invaded by Britain, France and Israel in an attempt to overthrow the government to replace Nasser with an administration that would be compliant to western imperialist interests. Nonetheless, the United States administration of President Dwight D. Eisenhower opposed the intervention and threatened to wreck London financially if the European and Israeli forces were not withdrawn.

Eisenhower viewed the move by his European counterparts as an attempt to reassert their colonial status during the post-World War II period. Washington had solidified its role as the sole dominant imperialist state after 1945 and was seeking to develop relations with emerging independent nations in Africa and Asia as a counterweight to the rapidly growing influence of the Union of Soviet Socialist Republics (USSR) and the People’s Republic of China.

As early as 1954, Egypt had claimed its sovereignty over Tiran and Sanafir before the United Nations Security Council stating that the islands were part of the delimitation of territory dividing Egypt from the Ottoman Empire in 1906. During WWII Egyptian troops were stationed on the islands in order to protect the Suez Canal.

The decision to raise the issue of sovereignty over the two islands is clearly related to the financial support provided by Riyadh to Egypt in recent years. El-Sisi, a former Field Marshall in the Egyptian military, led the coup against the Freedom and Justice Party (FJP) government of President Mohamed Morsi in July 2013.

Morsi, who still remains imprisoned four years after the coup, was a member of the Muslim Brotherhood which backed the FJP. The military takeover was never labeled as a coup by the U.S. under the administration of President Barack Obama.

In 1949, just one year after the establishment of the Israeli state, the two islands became a source of conflict between Egypt and Saudi Arabia in opposition to Tel Aviv. Egyptian military forces took control of the islands in response to the seizure of Um al Rashrash, later renamed Eilat, providing Israel with access to the Red Sea from the Straits of Tiran which was essential to its capacity to engage in foreign trade with British colonies in East Africa and Asia particularly oil producing areas in the Persian Gulf.

In May 1948 when the war for the establishment of Israel was underway, Egypt blocked the ability of Israel and other countries carrying goods there to utilize the Suez Canal. This action coupled with the refusal of other regional countries to allow trade inland by Israel made the sovereignty over the Gulf of Aqaba (called Gulf of Eilat by Tel Aviv) essential to the economic viability of the Jewish state.

Egypt in December 1949 began to erect military installations on Sanafir, Tiran and along the Sinai coast across from the islands in an apparent effort to block the straits. However, in January 1950, Egypt made it clear that it had no intentions of preventing trade through the Straits of Tiran leading to the Gulf of Aqaba (Eilat).

The Egyptian memorandum to the United States dated January 28, 1950 stated: “In 1949, Egypt occupied the islands of Tiran and Sanafir at the entrance of the Gulf of Aqaba. Gun emplacements were installed at Ras Nasrani and Egypt thus assumed effective control of the three-mile-wide straits and a blockade was imposed on shipping bound for the Israeli port of Eilat. On 28 January 1950, Egypt informed the United States of the occupation of Dran and Sanafir and explained the nature of the occupation.”

This same document continues noting three points in reference to Egyptian policy with respect to the two islands and access to the Straits of Tiran: “Taking into consideration certain velleities which have manifested themselves recently on the part of Israel authorities on behalf of the islands Tiran and Sanafir in the Red Sea at the entrance of the Gulf of Aqaba, the Government of Egypt acting in full accord with the Government of Saudi Arabia has given orders to occupy effectively these two islands. This occupation is now an accomplished fact. (2) In doing this Egypt wanted simply to confirm its right (as well as every possible right of the Kingdom of Saudi Arabia) in regard to the mentioned islands which by their geographical position are at least 3 marine miles off the Egyptian side of Sinai and 4 miles approximately off the opposite side of Saudi Arabia, all this in order to forestall any attempt on or possible violation of its rights.

Finally, the memorandum emphasizes: (3) “This occupation is not conceived in a spirit to hinder in whatever way it may be the innocent passage across the maritime space separating these two islands from the Egyptian coast of Sinai. It goes without saying that this passage, the only practicable, will remain free as in the past, being in conformity with the international practice and the recognized principles of international law.”

By 1966, tensions were escalating again in the region when Israel began a series of attacks against its neighbors. In November of that year Israeli Defense Forces (IDF) attacked al-Samu on the West Bank of Jordan leaving 18 killed and 54 wounded.

Later in April 1967, Israeli military forces shot down six Syrian MIG fighter jets. Egyptian President Nasser sought to respond by mobilizing troops in the Sinai, requesting the departure of the UN Emergency Forces (UNEF) from the area on May 18 where they had been stationed since the conclusion of the 1956 war over the Suez Canal and blocking access by Israel to the Gulf of Aqaba.

Intelligence reports from the Soviet Union suggested that Israel was planning a major assault on Egypt, Syria and Jordan. Egypt moved to establish a military pact with Jordan, Syria, Iraq and other regional states against Israeli aggression.

On June 5, a preemptive strike by the Israeli Air Force (IAF) destroyed 90 percent of Egyptian warplanes on their tarmacs. Lacking air cover, Egyptian troops in the Sinai had no protection against massive aerial bombardment by Israel leading to a colossal defeat. It is estimated that 10,000 Egyptian soldiers died in the June 1967 war along with thousands of other troops from Syria and Jordan. Israeli deaths were said to have been around 700.

Within a matter of three days the IDF had taken the Egyptian Sinai up to the Suez Canal and the West Bank under Jordanian control at the time including East Jerusalem. The UN Security Council voted in favor of an immediate ceasefire on June 7 which was accepted by Israel and Jordan on the same day. Egypt agreed to a ceasefire the following day on June 8.

Syria did not accept the terms of the ceasefire until June 10. On June 9, Israel launched an assault on the Golan Heights taking control of large sections of the area after only a day of intense fighting. The following day Damascus accepted the UN ceasefire agreement.

In a matter of just five days Israel had doubled the size of its occupation into Jordan, Egypt and Syria. On June 9, President Nasser went on national radio to offer his resignation from office. However, mass demonstrations in Egypt demanded that he remain as president which Nasser did until his death in 1970.

Six years later in October 1973, Egypt and Syria attacked Israel in both the Sinai and the Golan Heights. Egypt, then under the leadership of Anwar Sadat, was successful in retaking areas within the Sinai after Israeli intelligence doubted the capacity and willingness of Cairo to launch another war.

The October 1973 war brought the Soviet Union and the U.S. closer to a direct confrontation since Moscow was supplying military equipment to Egypt and Washington to Israel. Although 20,000 Soviet military advisers had been expelled from Egypt by Sadat in 1972, Moscow continued to supply intelligence and military support to Cairo. Eventually by 1978-79, Egypt had agreed to a separate peace with the State of Israel signing the Camp David Accords which were brokered by the U.S. administration of President Jimmy Carter.  This represented the first of such an agreement with Israel since the establishment of the state in 1948.

From the standpoint of African territorial claims to the islands of Sanafir and Tiran, it is significant to acknowledge the role of this strategic waterway around the Red Sea dating back thousands of years. Prior to the intervention and dominance of Egypt by a series of foreign occupying powers from Asia, the Arabian Peninsula and the Southern European empires of Greece and Rome, Africans had utilized the region to build the earliest advanced civilizations in human history.

There was extensive trade across the Red Sea between the Thebes port of Elim and Elat at the top of the Gulf as early as the Fourth Dynasty in Egypt (2613-2494 B.C.).  Trading routes established in  the Red Sea leading south to the ancient civilization of Punt are cited in historical documentation from the fifth, sixth, eleventh, twelfth and the Eighteenth Dynasties in Egypt when Hatshepsut had constructed fleets to facilitate trade journeying south to Punt in a months-long voyage. Thebes utilized Nubian gold from the south in the Kush civilization to facilitate the purchase of valuable commodities such as linen, and copper amulets used for the mummification industry at Karnak. Egyptian settlements near Timna at the head of the Gulf date back to the Eighteenth Dynasty.

Nevertheless, in the modern period, Egypt has become dependent upon the financial assistance of the U.S. and its allies in the Gulf Cooperation Council (GCC) especially Saudi Arabia. Cairo’s foreign policy is reflected in its ongoing economic arrangements with Israel in regard to the supply of natural gas from the Sinai, its support and participation in the GCC aerial bombardments and ground operations in Yemen since March 2015 aimed at the defeat of the Ansurallah movement, and the signing-on to a series demands directed against Qatar which has been blockaded by Saudi Arabia, the United Arab Emirates and Bahrain.

It is within this historical and political context that the recent transfer of Sanafir and Tiran to Saudi Arabia must be viewed. Until Africa and the Middle East breaks with the neo-colonial dominance of the imperialist powers and their allies, the sovereignty and genuine independence of Africa and West Asia will remain elusive.