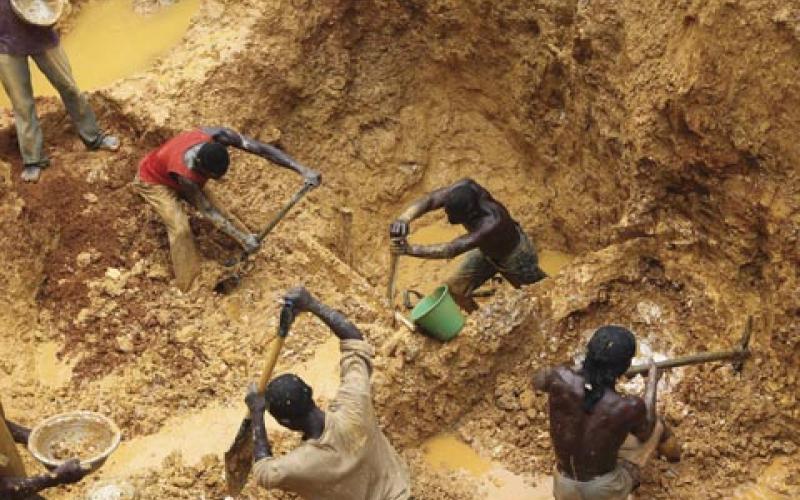 TrustAfrica, an African foundation, mobilised experts in the mining field to contribute to the debates on Illicit Financial Flows in the mining sector at the First African Mining Forum organised by the African Union.

TrustAfrica, an African foundation, mobilised experts in the mining field to contribute to the debates on Illicit Financial Flows in the mining sector at the First African Mining Forum organised by the African Union.

The African Union (AU), and its Specialised Agency, the Africa Minerals Development Centre (AMDC) [[i]], organised the first “African Forum on Mining” in Accra, Ghana, on 13-15 November 2019. The Conference, themed “Africa Mining Vision at 10: Looking Back, Moving Forward”, was celebrating the ten-year anniversary of the adoption of the Africa Mining Vision (AMV) [[ii]] by African heads of states. TrustAfrica [[iii]] was invited to discuss the issue of Illicit Financial Flows (IFFs) in the mining sector. The foundation brought a civil society perspective by giving the floor to experts in the field.

African countries are suffering huge capital losses due to IFFs. These illicit flows deprive African nations of vital tax revenues that could be spent on social programmes including healthcare, education and basic infrastructure. The vast majority of these IFFs are a result of aggressive tax planning and profit shifting by corporates in the mining sector.

In a framing presentation made during the event, Briggs Bomba, Programmes Director of TrustAfrica, highlighted the importance to understand IFFs beyond the limited definition of “money that is illegally earned, transferred or used” [[iv]] given by the High-Level Panel on IFFs. In the African context, the phenomenon of IFFs must be understood to encompass the multiple ways in which wealth that is generated on the continent and should be invested in Africa’s human development and economic transformation is unjustly shifted, resulting in a net transfer of wealth out of Africa. From this perspective, all the nine programme clusters of the AMV [[v]] have relevance to the conversation around IFFs in as far as they seek to ensure better optimised minerals rents and money that is retained on the continent.

His statement was followed by that of Mercy Adhiambo Orengo [[vi]] from the Kenyan newspaper The Standard. She shared a story published the year before about a young 28-year-old gold miner [[vii]], who is handling more gold than the richest billionaire of Kenya, yet his children are dying of malnutrition. She reminded the participants that IFFs are universal and affect also women and children, yet this is not clearly portrayed.

Indeed, IFFs are often considered as impacting governments, but seldom the people. While explaining the work undertaken by  Wacam [[viii]] in Ghana, Kwaku Afari clearly showed how central communities are to the issue of IFFs. When dealing with IFFs, costs that subsidise the already rich companies that exploit natural resources on the continent are not being taken into consideration. When a mining activity is about to begin, the first concern is about ascertaining whether or not the community has a say on the mining activities. Most communities don’t know how the mining process works, and they are not aware of the obligation of Free Prior Informed Consent (FPIC), [[ix]] therefore they do not exercise it and for those who do, their rights to FPIC are mostly not respected by the companies.

The case study on Ghana was further dug into with the presentation made by Bishop Akolgo, former Executive Director of the Integrated Social Development Centre (ISODEC) and expert on the mining industry.  He laid down the foundation of the discussion with fundamental questions to the audience namely “Why rich yet poor? is our inability to convert our minerals resources into lasing benefits for society due to ignorance or greed”. In order to get data on IFFs, ISODEC was able to model and trace the money flow in trade between the European Union Countries and the USA in Ghana, between 2000 and 2012. The results showed that on average, Ghana loses not less than US$2 billion per year, because of under invoicing and over invoicing in trades between the United States and Europe. On average 16 percent is mispriced in export, and 20 percent is mispriced in import.Bishop Akolgo then identified the three ways Ghana is losing in the mining sector. First through bad negotiations in the assignment of mining rights, when the government value its assets – gold, oil, diamond, at 5 percent as royalty. Second, during the production phase where the Government has no capacity to audit and control the quantity and quality of inputs and how inputs are procured, especially costs involved in producing the minerals or oil/gas leading to inflated costs. And finally, comes the time to file the returns that are directly going to tax heavens where they pay little or nothing thus not benefiting the host country of the resource and its citizens.

What is the proposed way forward?

First, there is an urgent need to build and strengthen our governments’ capacity to manage our economy, monitor the production, revalue our assets to at least 50 percent, calculate the costs associated to the mining process in relation to communities, and finally tax companies accordingly in order to stop capital flight. Second, we should also forge multi-stakeholder compacts to establish consensus between state, private sector, and civil society on the nature and magnitude of the problem of IFFs in the mining sector and come up with shared solutions. And finally, in order to do that, we need to build a diverse movement of donors, researchers, policymakers and activists who will champion the implementation of the AMV using popular campaigns.

This meeting allowed civil society experts to share their knowledge and insights on IFFs flows in the mining sector to contribute to the larger debate on supporting the implementation of the AMV.