New York climate summits were a contest between leaders and people 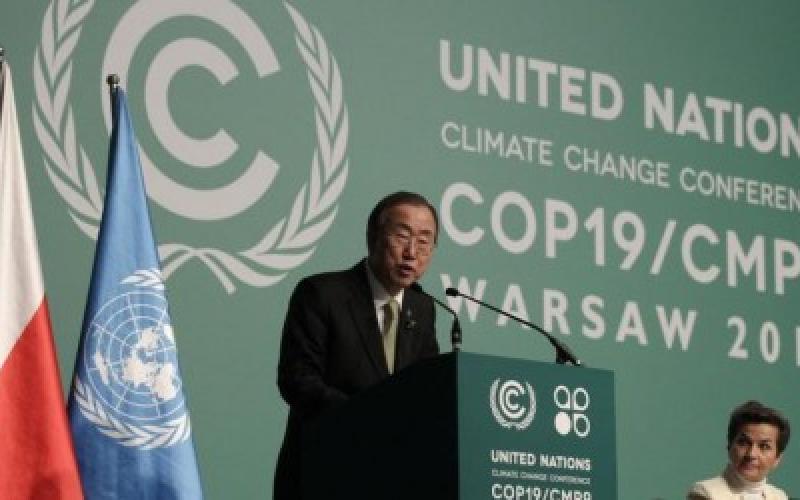 The two Summits held last month ended on different notes. But while the world’s leaders failed to live up to people’s expectations, the people on the other hand showed that they will no longer sit idle waiting for a solution to the climate crisis – they are ready to find solutions

As the dust raised by thousands of people who marched in the streets of Manhattan in support of just response to climate change settles, observers and analysts are scratching their heads to determine the exact outcome of the UN Secretary General Ban Ki Moon’s High Level Leaders’ Summit on Climate Change, which was held on September 23rd, 2014, and brought all world countries to ‘announce their climate ambitions’.

The much-publicized summit was billed as one of the biggest leaders convergences to tackle the biggest 21st century threat to the survival of humanity, but the absence of two leading countries accounting for almost half of the world’s population denied the summit a place in history claimed by a similar jamboree held during the Copenhagen Climate Change Conference in 2009. The Chinese President Xi Jinping and newly-elected Indian Premier Narendra Modi, leaders of fast-rising economic giants and most populous countries in the world shocked the world when they sent low-key representatives to the Summit that was aimed to be the preserve of the high and mighty to demonstrate the highest political commitment to address the runaway accumulation of greenhouse gases in the atmosphere.

Was it a deliberate attempt by the two Asian giants to send a signal to the world that they were not interested in the global effort to address climate change or was it the usual global geopolitics at play? It should be remembered that China and India have forged partnership with other rapidly growing global economies to form a new economic power axis ostensibly to challenge the dominance of the US and the so-called the G7’s dominance of the world economy. The BRICS (Brazil, Russia, India China and South Africa) and BASIC (Brazil, South Africa, India and China) groups, that have announced the establishment of a BRICS Bank to rival World Bank, have emerged at a time when the economic growth in the dominant developed world has slowed down.

Obviously, there is a direct relationship between economic growth of a particular country and the levels of emission such country spews into the atmosphere. With the Gross National Income (GNI) per capita of $43,480, the United states has overshot its fair share of emissions limit of 2 degrees Celsius by 1,407% compared to China, a medium human development country with a GNI of $7,945 and 423 per cent overshot of 2 degrees Celsius. Though China has currently overtaken US in pumping the emissions into the atmosphere, the fact is that the country still remains at a medium income state in human development. And thus the politics between the emerging economies and the countries that are said to bear the biggest responsibility in the historical accumulation of greenhouse gases into the atmosphere. The North-South blame-game which has apparently stalled the progress in the ongoing international dialogue for a suitable global agreement to arrest the roasting of the planet is prompted by economic considerations. Emerging economies are accusing their industrialised counterparts of using skewed scientific numbers to slow them down in their march to industrialization. The talk in the corridors of negotiations is that the industrialised countries attained their current status by pumping immeasurable amounts of GHGs into the atmosphere, and thus should let poor countries to release as much so that they can also reach same level of development.

And that explains the endless game of musical chairs, the fatiguing negotiations under the UNFCCC for a record twenty years that has yielded nothing in addressing the debilitating impacts of climate change now hitting the poorest and the most vulnerable people on earth. With the collapse of WTO negotiations, the climate change negotiations have now become the next space for North-South elite contest, and as usual, the casualties are the poor, who watch as livelihood options become narrower.

The unprecedented Peoples’ Climate Summit held parallel to the UN Leaders’ Summit in New York, preceded by the historic march never seen before in the history of climate conferences was indeed a wake-up call to world leaders that citizens have lost hope with their endless rhetoric with no action. The changing climate has become the rallying point for unifying people from both the North and the South. The people have realized that the solution to climate change does not rely on their leaders, but communities themselves.

The fact that the UN Secretary General Ban Ki Moon, together with former US Vice-President Al Gore and New York City Mayor De Bassio had to abandon their posh offices to join archers in support of climate justice is testimony that people’s louder voices have gradually started permeating impervious ears of negotiators in the process earlier dominated by government bureaucrats protecting the interests of the polluters.

A record 400,000 US citizens from all corners of the vast country converged in New York using buses, boats, trains, subways, planes, and all means of available transport to announce to the world that they are together in the global effort to save Mother Earth from man’s destruction. Those from Africa, Asia, Latin America, Australia and other parts of the world privileged to attend the summit and march for the Planet were awed by the turnout and testimonies by people who we earlier thought do not care about others in the South because they are rich.

In various convergences, we heard the stories of American citizens at the frontline of climate change impacts in far-flung district of Richmond, California, recounting how their lives have changed just like ours in Africa. We heard, unbelievably, that there are vulnerable communities in the City of New York just as there are in Durban City where Desmond D’sa of SDCEA, who also was present to share harrowing stories of state-sponsored pollution that has poisoned thousands of South Africans as their government stares. American women of colour are as vulnerable as Emem Okon from Nigeria’s restless Niger Delta, whose devastation has been exacerbated by wanton oil exploitation by American giant Chevron. Emen, a gender activist, had travelled thousands of miles to join other frontline communities in telling the world leaders that it’s the people who have the solution to climate change.

The leaders, once again, demonstrated that parochial business interests and cold-war-era and tug-of-war between the rich and poor countries will never end soon even as the world stares to the planetary crisis. While urging China and the US to do more to combat climate change, French President pledged US$1 billion during the summit, which assembled more than 120 World Leaders in New York. Though he acknowledged the magnitude of climate crisis would ‘define the contours of this century more dramatically than any other issue’ during his speech, US President Barack Obama did not make any specific financial commitments. Businesses, including oil companies responsible for the current mess, were invited to the table in a mockery that ended up as another insult to the communities looking upon their leaders to take action on climate crisis. In total, a paltry US$1.3 Billion was pledged by seven countries out of all the cast assembling in New York, raising questions why they had to burn millions of carbon dioxide cubic metres to do what they could have done seated in their offices.

The echoes of Copenhagen where another convergence of leaders of such magnitude took place, rung into the ears of those who expected miracles, that there could be a change of heart by those responsible to lead the world out of potential catastrophe.

Sceptical analysts had already dismissed the UN Climate Summit as a diversionary tactic by those in power to slow the momentum towards Paris where a New Climate Change Agreement is supposed to be sealed. It came to be.

But the moment offered an opportunity for people across the world to converge and strengthen their unities in the growing climate justice movement. The only tangible outcome from the UN Climate Summit, at least from citizens’ perspective, was the mobilization and solidarity witnessed during the People’s Climate Summit, bringing together thousands of people to exchange ideas on how they are applying locally-based solutions to climate change.

Ultimately, the two Summits ended in different notes, but while the leaders failed to live up to people’s expectations, the people then showed that they will no longer sit idle waiting for a solution to the climate crisis – they are ready to provide the solution. In his book, Politics of Climate Justice: Paralysis above, Movement below, Patrick Bond castigates favoured strategies of key elites from the crisis-ridden global and national power blocs and finds them incapable of reconciling the threat to the planet with their economies' addiction to fossil fuels, and sees solutions to the expanded climate justice movement capable of driving people-centred solutions to climate crisis. New York was one of the sites to grow the movement.

* Mithika Mwenda works with the Pan African Climate Justice Alliance - a continental coalition of civil society organisations on the African continent brought together by a common agenda of promoting and advocating for climate related and equity based development that considers climate change as a key driver of sustainable development.