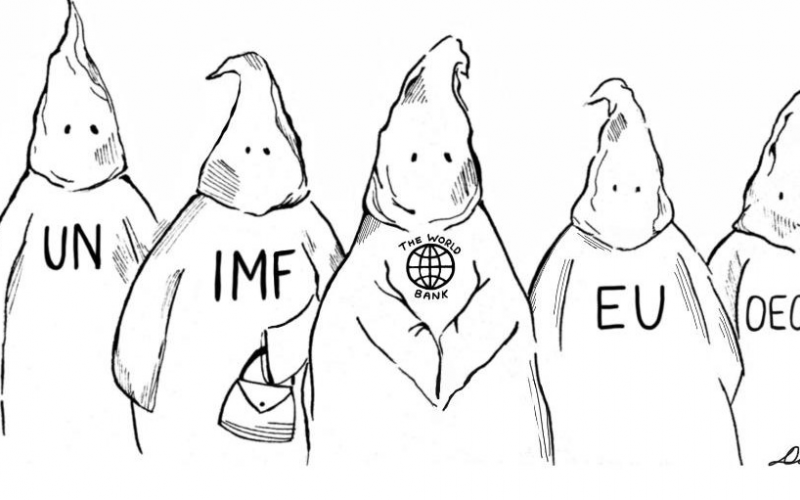 We are nearly two decades into the 21st century. African nations are lumped together as “s…hole countries” by the President of the free world. KKK members no longer need the cover of the night or their hoods as they chant “blood and soil” in the main streets of America, laying an exclusive claim to American soil by Aryan blood.

The rising tide of racism is borne out of a recycled old belief that black and brown people are genetically inferior. In 2009, a Harvard PhD dissertation by Jason Richwine asserted, “the average IQ of immigrants in the United States is substantially lower than that of the white native population… Selecting high-IQ immigrants would ameliorate these problems.” Richwine is the co-author of the Heritage Foundation’s immigration report that serves as an operational manual for President Trump’s immigration agenda. Get rid of immigrants from Africa, Haiti and El Salvador and bring more from Norway.

Europe’s rising far right movement is borne out of the same doctrine. The negative impact of the growing racism and anti-people of colour rhetoric is not limited to keeping people of colour off American and European soils.

The insinuation that immigrants of colour are unskilled has fuelled a broader racist narrative that they are innately inferior. This is far more dangerous than people realise because international organisations such as the United Nations (UN) and the World Bank (WB) that are financed by Europe and America become reluctant executioners of the racist agenda.

In 2015, the WB declared that the management performance of an Ethiopian national (Yonas Biru) was beyond the natural capability of a black man and retroactively degraded it. It defended its decision before its administrative tribunal, even after its official diversity report branded it as a “blatant and virulent case of racism” and the WB Senior Advisor for Racial Equality filed an amicus brief condemning it as “profoundly beyond the pale.”

Ben Carson, the only African American member of President Trump’s cabinet, attributed the failure to redress the injustice to “World Bank President Jim Yong Kim’s lack of humanity.” Armstrong Williams, an African American Trump surrogate, published an Op-ed in The Hill, affirming the WB “disenfranchised” Biru of his record because it “deems his record too good to be true for a black man.”

Pastor Steve Parson, a member of the Advisory Board for National Diversity Coalition for Trump, published an open letter to President Trump, confirming that the WB stripped Biru of his record because it is “too-good-to-be-true for a black man.” He pleaded with the President to intervene, stating: “Dr. Kim’s lack of humanity that Dr. Carson decried should not be tolerated. Justice and humanity demand swift action.”

The Pastor’s plea fell on deaf ears. In an era where “blood and soil” is resurrected from the ashes of Nazi Germany and baptised with the unholy waters of the tabloid science of racial intelligence quotient (IQ), people of colour are the first to be pushed outside the realm of justice and humanity.

Though the injustice Biru endured makes a compelling tale in and of itself, there are two bigger issues that have made it a cause célèbre. First, it lays bare the institutional contours of global racism. Second, it shows that international board meetings are “rubber-stamping” formalities to legitimise decisions that have already been made through confidential memos and telephone calls.

The actions that the European Union (EU), Organisation for Economic Cooperation and Development (OECD), and International Monetary Fund (IMF) took before the WB resorted to using “racial IQ” as a legal defence show a systematic policy to maintain a race-based global governance architecture.

In October 2016, Senator Van Hollen wrote to the US Departments of State and Treasury stating: “While serving as the Deputy Global Manager of the International Comparison Program (ICP), Dr. Biru applied for promotion to Global Manager. In response, he was told that he could not be promoted because ‘Europeans are not used to seeing a black man in a position of power.’”

The ICP compares living standards in over 180 countries. Though it is administered by the WB, it has an independent Global Executive Board, representing international agencies and selected participating nations.

An Iranian WB official (Shaida Badiee) confirmed on the record that the WB denied Biru the Global Manager position after she received a confidential memo containing “unsolicited sensitive feedback” from some members of the Global Executive Board, with which she did “not feel comfortable.” When asked for a copy of the memo, she changed her story. “The consultations were oral, not written.”

Even though the WB assured the author of the memo “[Biru] will not get a copy or see it,” Biru got a copy of it. It was authored by an Australian government official (Dennis Trewin), the chair of the Global Executive Board. It revealed the EU, OECD, and IMF as the sources of the “unsolicited sensitive feedback.”

The memo disclosed that the WB and the Australian agreed on a consolation arrangement whereby Biru would be allowed to run the program behind the scenes, but a white consultant would serve as the face of the program, fronting as the Global Manager. This was despite the Australian’s statement in the confidential memo: “I understand it is not possible even on an informal basis to designate a consultant as global manager.”

The Australian convened the Executive Board at the UN to institutionalise the confidential agreement under the Board’s stamp of approval. Principal Board members representing international agencies from Africa, Asia, Latin America and the Middle East chose not to attend.

Of the ten Board members representing international agencies, only those from the EU, OECD, IMF, WB and UN attended the “closed session with principals only” meeting. The meeting officially designated a white consultant as Global Manager. The cover-note to the minutes of the Board declared the minutes confidential from Board members who did not attend the meeting.

All rules were broken to defer to European racism. The Iranian WB official admitted on the record that the decision was made months before the Global Executive Board’s meeting, after she consulted with Europeans.

She went on to state that WB rules did not allow the consultant to work more than 150 days a year or perform managerial or supervisory duties. As an alternative the WB “suggested that [Biru] could assume the role of the Global Manager” and the consultant could “serve in a senior advisory capacity to the program.” This did not satisfy the Europeans because their concern was the optics of having a black man as the official Global Manager of a high-profile global program. The only alternative Europeans were willing to accept was to have Biru run the program behind the scenes and have a white consultant as Global Manager, without his managing anything.

The Iranian WB official noted, “the day-to-day coordination of the work and the ICP team was basically taken over by Yonas Biru,” without the Global Manager title. She said: “I am sorry, it broke my heart.” Her statements were confirmed by the WB that Biru “took charge of the ICP work at its most critical time.”

As the Chair of the Global Executive Board, the Australian was asked to “explain the basis” on which the Global Executive Board endorsed Biru to run the program internally but found him unfit to be designated Global Manager. His response was: “I do not have enough information to comment on this.” This is the person who negotiated the arrangement with the WB over the phone and memorialised it in a confidential memo.

Since the WB is immune from lawsuits, Biru filed a racial discrimination claim with the WB Peer Review Panel. The WB put the Panel “on notice” not to allow Biru to call the EU, OECD or IMF for cross-examination because they do not want to be cross-examined. The WB lawyer established for the record “The General Counsel of OECD is making a special trip” to Washington. They are “very nervous.” They are “being advised of the risk.”

The Panel complied and denied Biru the right to cross-examine the three institutions. He filed an appeal with the WB Tribunal. In retaliation, the WB retroactively degraded his personnel record, going as far as redacting his management roles from its publications. Having totally disenfranchised him of his professional accomplishments, the WB claimed he was not qualified to be a manager at any level and terminated him.

During the Tribunal hearing, Biru faced utter contempt from the Tribunal. The first question that one of the Tribunal judges asked him was: “What was it being designated Global Manager that is so magical to have led you to this stage where you think it was a loss to the rest of the world?”

A high-level UN official (Paul Cheung) testified before the Tribunal, expressing disbelief that Biru was permitted to mount a legal challenge. He said, the decision was made by “senior executives of major international organisations” and “this decision should not be challenged in any proceeding.” The Tribunal agreed and dismissed the case.

The Tribunal reviewed Biru’s wrongful termination allegation separately. It found it “unlawful and arbitrary.” Nonetheless, it rejected his request for reinstatement because “He had criticised his managers.” Biru was left without a job and professional credentials.

The two judgements sparked a chorus of global outrage, prompting the US Treasury Department and 26 US lawmakers to intervene. As Senator Van Hollen documented, “Ultimately the World Bank internally restored Biru’s original, correct personnel record.” Nonetheless, it refused to reinstate his title and leadership position in its publications and correct the defamatory record on its website.

The WB has never denied the fact that its Staff Rule requires it to (1) disclose its employee’s official record to prospective employers to counter false or misleading public information, and (2) correct defamatory public record to mitigate reputational harm.

It was left with two equally bad choices. The first was to honour its Staff Rule and publicly disclose Biru’s stellar performance record and correct the falsified public record. This would entail withdrawing the perjured evidence it used during the Tribunal proceedings. The second was to come up with an explanation why it will not honour its Staff Rule in Biru’s case.

It chose the second option and argued that the WB will not honour its Staff Rule in Biru’s case because his internally restored official record is beyond the natural capability of a black man. Therefore, it will not be used to counter the information in on the WB website.

The chairman of the African Union Commission, Moussa Faki Mahmat, is right to condemn President Trump’s “s…hole countries” doctrine as a “message of hatred and the desire to marginalise Africa.” Similarly, the UN human rights spokesperson Rupert Colville had it right labelling the doctrine as “racist.” The two gentlemen are commendable for not mincing their words against President Trump. It would be a dereliction of duty for them not to denounce the EU, OECD, IMF, WB and UN with the same valour and vigour.

Similarly, Senator Van Hollen carries a heavy moral burden to ensure justice is served and a system of accountability is established in international institutions that receive US funding. This burden is inexorable, considering that the good senator has documented “overwhelming evidence,” showing the WB “Tribunal uses different judicial standards for black and white complainants.”

Likewise, as the only African-American cabinet member in the Trump administration, Carson carries an equally onerous moral duty to see through his call for “holding the World Bank accountable” for the abominable racial injustice that he found as a manifest demonstration of “lack of humanity.”

Allowing such an injustice to stand would be tantamount to endorsing race-based IQ and legitimising the “s…hole countries” doctrine that dehumanises over one billion people of African origin. #EndGlobalRacism