Dual US war on Black people 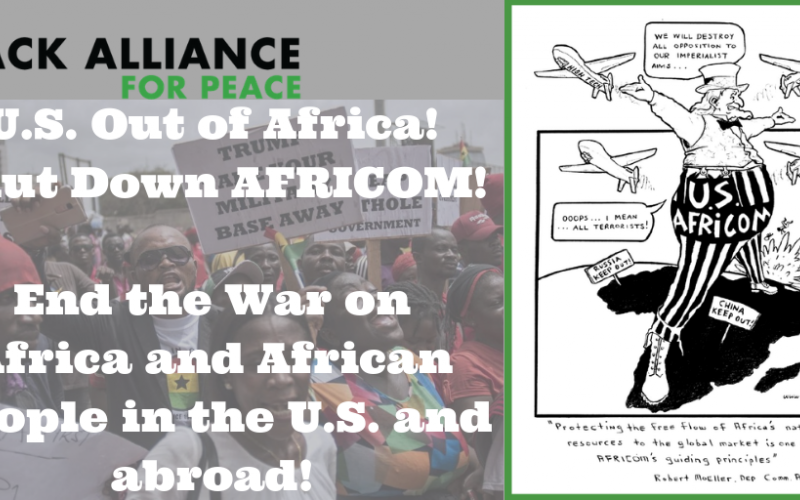 Parallel tracks of United States government policy against the Black working class in the US and on the African continent expose much more than incidental similarity, but a concerted fatal conspiracy.

For the US, African people globally have no economic value short of being unwitting consumers whose labour-use has expired, and whose resistance to social injustice must be repressed at all costs. This conflict of interests reveals a natural contradiction between North American versus African or Black identities. African-American on many levels is an oxymoron.

This month marks the 10th anniversary of the United States Africa Command (AFRICOM), created on 1 October 2008. AFRICOM is the re-colonisation of Africa by the US and constitutes the new scramble for Africa equivalent to when, in the 1800s, the colonial powers fought over which of them would dominate which parts of the resource-rich continent.

Pre-dating AFRICOM by ten years is its domestic counterpart, the “National Defense Authorisation Act of 1997” signed into law by Bill Clinton and more commonly known as the 1033 Programme. The 1033 Programme facilitates the transfer of excess US Department of Defense supplies and equipment to state and local law enforcement agencies, which are invariably used against Black and Brown communities in the US. The Programme has allowed police departments to acquire vehicles (land, air, and sea), weapons, computer equipment, fingerprint equipment, night vision equipment, radios and televisions, first aid equipment, tents and sleeping bags, photographic equipment and more.

There is no more glaring proof that the US has been waging war against both Black people within its borders and those in Africa than a cursory examination of the responses by the US national security state to Black movements for decolonisation and self-determination inside the US and on the continent. A parallel history in form and essence unfolds when comparing what took place from the 1950s to the 70s in the US Black Power, Civil Rights movements with the independence, anti-colonial movement in Africa.

Documented evidence vividly illustrates that the Federal Bureau of Investigation (FBI)’s infamous Counterintelligence Programme, also known as COINTELPRO, orchestrated operations to “infiltrate, intimidate, imprison, and assassinate” the leaders of Black movements for social justice in the US.

In Africa, the US executed identical and chronologically aligned repression through the Central Intelligence Agency (CIA) against the independent African governments and liberation movements sweeping the continent. No matter where in the world African people are, our organising for social justice is treated as a threat to the political, economic, and cultural interest of the US ruling class that actually constitutes the essence of Americanism. Democratically elected leaders of the new African states were subjected to coup d’états and incessant assassination attempts including that of Kwame Nkrumahin Ghana, the successful assassinationof Patrice Lumumba in the Congo, and today we can add the 2011 brutal murder of Muammar Gaddafi in Libya.

The need to feed a growing and insatiable military-industrial complex and to guarantee that no radical Black movements emerge within US borders or on the African continent has given rise to increased and better-coordinated militarisation both in Africa through AFRICOM and Black communities in the US through the 1033 Programme.

AFRICOM is the US response to economic competition with China and its increased influence on the continent. AFRICOM is also to prevent the emergence of any independent African influence or force. It is not to fight drug trafficking or terrorism as stated in their promotional materials. The US military presence is a destabilising presence demonstrated by events like the 2012 overthrow of a democratically elected government in Mali by an AFRICOM trainedCaptain Amadou Haya Sanogo and the 2015 coup in Burkina Faso led by AFRICOM trainedColonel-Major Gilbert Diendere.

During this month the Black Alliance for Peacehas been rolling out its campaign US Out of Africa: Shut Down AFRICOMurging all peace and justice loving people to sign the campaign’s petitiondirected to the House Armed Services Committee and the Congressional Black Caucus.

In his last year of office, instead of doing what he could to abolish the 1033 Programme, Barack Obama put minor restrictionson it, which the Trump administration immediately reversed within its first year. The Bush administration, progenitor of AFRICOM, was rebuked across the African continent when attempting to establish the headquarters for AFRICOM on the continent, forcing the new command to work out of Europe.

Then came the Obama administration that paved the way for the proliferation of AFRICOM on the continent, as quisling African leaders fell over themselves to cooperate with the first Black US President. A now acceptable scenario has resulted in 46 various forms of US bases as well as military-to-military relations between almost all of the 54 African countries and the United States. US Special Forces troops now operate in more than a dozen African nations reflecting a 1,900 percent increase in the US military presence in Africa.

What impact has increased militarisation abroad had on US Black and Brown communities? Since 1990, about US $6 billion worth of US Department of Defense property has been transferredto local, state, federal and tribal law-enforcement agencies while communities are suffering from austerity cuts. The world saw this deployed against Black rebellions in response to the police shooting of an unarmed Michael Brown in Ferguson, Missouri.

The first actual militarisation of the US police started 28 years before the 1033 Programme in the 1960s with the creation of the Special Weapons And Tactics units –commonly known as SWAT. In South Africa (Azania) the same thing was developed at exactly the same time. The Special Task Force (STF) was an elite police tactical unit of the white settler regime’s South African Police Service (SAPS). The first significant deployments of SWAT and STF units were to repress African/Black movements for liberation. On 9 December 1969 SWAT was deployed for a four-hour confrontation with members of the Black Panthers in a densely populated area of Los Angeles. In 1967 about 2,000 STF forces were deployed to guard the northern border of Rhodesia (modern-day Zimbabwe) to assist Rhodesian security forces against the liberation forces there.

Roger Morris, former National Security staffer for Henry Kissinger, admits that of the dozens of coup d’étatsthat have taken place in post-colonial Africa only two or three were free of the hidden hand of US destabilisation. The sale of small arms to “Black Africa” was a policy initiated through Nixon’s National Security Study Memorandum 201: Increased Arms sales to Black Africa to stop the “threat of communism.” Today the conditions they have created are dishonestly used at the pretext for AFRICOM.

Likewise in the US, it has been shownthat the rise of so-called street gangs like the Bloods and Crips reflect a generation of radicalised youth misguided after a decimated 1960s Black Power movement. In spite of gun control laws like California’s Mulford Actsupported even by the National Rifle Association to curtail the Black Panther Party’s armed stand to defend the Black community from police terror, by the 1980s semi-automatic weaponry and other sophisticated small arms found its way into US Black communities and countries in Africa.

US officials reject as unauthentic the “Study Response To Presidential Security Review Memorandum NSC-46” that outlines a deliberate and sophisticated policy of fostering political divisions between ”Black Africa and the US Black Movement.” Measures like:

1. Specific steps should be taken with the help of appropriate government agencies to inhibit coordinated activity of the Black Movement in the United States.

2. Special clandestine operations should be launched by the CIA to generate mistrust and hostility in American and world opinion against joint activity of the two forces…

3. US embassies to Black African countries specially interested in southern Africa must be highly circumspect in view of the activity … opposing the objectives and methods of US policy toward South Africa…” are all arguably what has been US policy.

The double standards and hypocrisy of the US government are clear, making it imperative that the ideological schizophrenia perpetuated by Americanism is broken. A mass movement must emerge that exposes AFRICOM, confronting the powers that be about it; and that makes it inseparable from the concerns we have over the militariatsion in our communities in the United States.

All peace and justice loving people can start by signing the US Out of Africa! Shut Down AFRICOM petition, spreading it to others and then getting involved.

* Netfa Freeman is an organiser in Pan-African Community Action, a member organisation in the Black Alliance for Peace, as well as an analyst at the Institute for Policy Studies.

BAP U.S. Out of Africa image.png