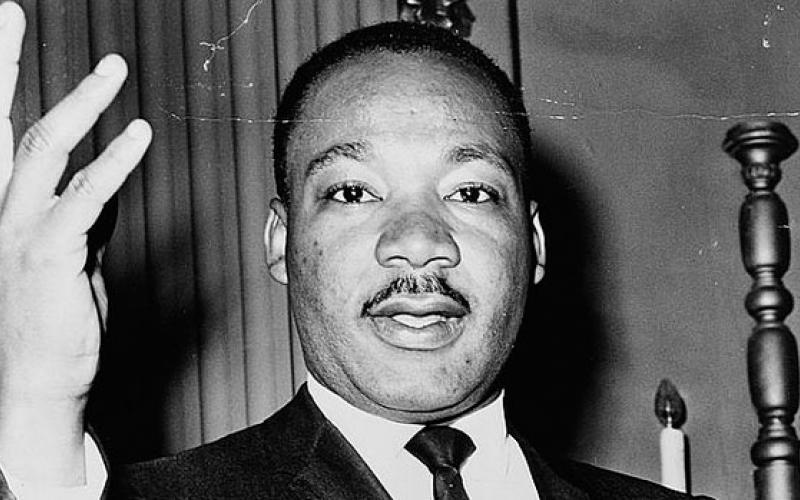 In this essay, the author objects to the portrayal of Martin Luther King Jr. by biographer David Garrow arguing that such a picture would not change King’s noble legacy that the world can be changed through kindness and charity.

Youngsters will learn words they will not understand.

You will answer them.
You will tell them:

Those words are not used any more.
Like stagecoaches, galleys or slavery.

That is why they have been
removed from the dictionaries.

David J. Garrow whose article “The troubling legacy of Martin Luther King” uses Federal Bureau of Investigation (FBI) records to speak of “the great civil rights leader as a sexual libertine who ‘laughed’ as a forcible rape took place,” has been referred to as a “progressive” historian. Historians are expected to tell the truth about the past and how they arrive at the truth, irrespective of whether they are viewed as progressive or regressive or progressive-regressive or regressive in the beginning but progressive later on or the other way round. In fact the rest of the world has slightly different meanings for most of the terms used in the United States such as “progressive,” “left” and “right” except perhaps Canada and Australia, which have a similar political ethos. Martin Luther King himself is anything but avowedly “left” since like Gandhi he was a deeply religious man who had a personal take on a lot of things that were his own insights eventually translated into action.

The Martin Luther King in the FBI records is not someone who is subject to ordinary “human” frailties but portrayed as a sex predator from a James Bond movie who will stoop to any level to get what he wants. There is no reason on earth why this portrayal should be seen as real in comparison to the man who led the civil rights campaign and created the conditions for the United States having the first black president four decades later. Martin Luther King’s “liberal” defenders are eager to show him as “human” and the problem with this so-called “human” perspective is that we are ignoring the equally “human” or less-than-human Director of the FBI, J. Edgar Hoover, an evil and ruthless man, who in fact eminently qualifies for a cold-blooded villain from a Hollywood movie.

My primary objection to King’s portrayal in the records is that if any of the wild stuff attributed to him were remotely true why would the FBI not leak it to the media in the 1960s itself and destroy the moral basis of the campaign by showing its most prominent leader in a poor light? Why preserve this stuff for posterity to make a judgment on King’s personal life in relation to his public persona? Another objection is: where is the victim of the “forcible” rape (someone should know that rape is the exercise of force without consent, without having to call it “forcible”) that King found amusing? Where are any of the people that these things happened to? How is it that the police in Oslo [Norway] did not maintain any records on what Martin Luther King and his friends were up to in December 1964 on the night before he received the Nobel Prize “when King’s group was running naked, drunk white prostitutes up and down the halls of the hotel”? It is impossible that an incident like this would have escaped public notice or police records. A man who comes to take the Nobel Prize, especially someone of Martin Luther King’s stature is not an ordinary person that no one is bothered with. I am seriously not waiting for 31 January 2027 to find out what these doctored tapes and cooked-up evidence are all about.

If there is one thing I know from experience it is that people who hate you will make up any lies against you. We are here talking about a man who, if he lived long enough, might have led the American public in the direction of a humane country that cared for the world instead of trying to maim and kill innocent people in the non-western parts of the globe. With his emphasis on nonviolence one can imagine how much hatred and fear King must have inspired in the American establishment. The credibility of the surveillance tapes and the desperation of the men who made these extensive notes are evident to those who wish to see. Simply for lack of anything better these men are willing to say and believe anything about King because it justifies their own Orientalist fantasies of a degenerate, corrupt black man, an “Emperor Jones” of sorts who cannot handle power which he is morbidly caught up with, which is what they expect King to be rather than what he really is.

I don’t understand the American media and government’s mania for getting into people’s personal lives. What the United States as a nation suffers from is a disease called “sex in the head” syndrome. This syndrome is a dangerous concoction of Judeo-Christian morality straight from the vengeful God of the Old Testament combined with political correctness lethal enough to make extinct the Burmese python in a matter of days. A powerful patriarchy combined with a racist worldview makes it possible for a nation to be that way. One can see the belligerent attitude of the United States eager to attack Iran in order to satisfy its allies Saudi Arabia and Israel apart from acquiring cheap oil and selling weapons to governments that use them to murder dissenting voices.

The American media is busy coining new terms everyday for imaginary mental problems, which are not about sensitising people but just about making them aggressively self-centred with no notion that there are others on this planet beside themselves. People don’t just need words or to be talking about their feelings all the time. This is why you see how much is invested in American popular culture in talking about “sex” and having a “sex life” as if that is the only means to individual liberation. “I refuse to grow up” is not an escape from neurosis; it is the neurosis that America as a nation needs to come out of. I don’t understand why a “sex” scandal has to be invented to degrade a man as if people are completely normal other than in their sex lives; as if a sex life is the only yardstick by which a person could be measured; as if there is no deeper meaning to people’s actions except what they do in their bedrooms.

The unforgivable legal correctness that complements personal freedoms is meant to tell the ordinary citizens: you do what you like but you are being watched and monitored. The average American is actually made to believe that he or she is free without in fact being so. Being freer than someone in Iran or Saudi Arabia doesn’t translate into what personal freedom is all about. It is about the choice to be what you really are and who you wish to be; not live up to an image of a consumerist society bombarded upon you day in and day out relentlessly until you finally submit for lack of will more than anything else. It is a country where choices are sold on a daily basis by the media and the culture industry. You can only be a half-decent buyer of choices in a place like the United States. This is the broader outlook to the surveillance on Martin Luther King by the FBI that needs to be understood.

Powerful nations like powerful people don’t understand emotional and moral conflicts. Conflicts are a sign of emotional intelligence and sensitive men and women usually have them. They reach out to the world by working through their conflicts. That is what Gandhi and Martin Luther King are all about. They were men with serious conflicts without simple resolutions of any kind. Their detractors and haters are mediocre people who need recipes to survive because they have no idea what it means to be themselves outside the recipe.

Einstein is right when he says that, “The mediocre mind is incapable of understanding the man who refuses to bow blindly to conventional prejudices and chooses instead to express his opinions courageously and honestly.” Mediocrity and cynicism are intimate bedfellows that thrive on reducing human beings to a formula. This is the context to the cynicism and mediocrity of a nation like the United States that cannot believe in human goodness. This is why they need to dig into King’s personal life for anything that they can find to incriminate him and prove him to be guilty of shameful misconduct because it fits in their own warped image of human nature.

A mediocre agency like the FBI with a leader who ought to have been serving a sentence for untold crimes and a society steeped in cynicism are incapable of understanding what moral, psychological and physical effort it needs for someone to be a Martin Luther King; such organisations and such a society are to be unequivocally condemned for the death of Martin Luther King and the attempts to destroy his message by tarnishing his image in the vilest terms possible.

David Garrow’s article is as titillating as the juicy stuff in the FBI records. This is a history of salacious gossip that used to be enormously stimulating when I was a boy in the pre-internet days when pornographic material was difficult to obtain. A historian is responsible for what he or she believes, says and does. The article Garrow wrote ought to have waited until he found real evidence to substantiate the absurd claims made against Martin Luther King, which don’t seem to fall in place. That Bayard Rustin evinced an interest in the night life of Oslo is one thing. How does the FBI know it is another thing. How could a private discussion come to the knowledge of the FBI agent in a foreign country is a mystery to me!

I have no major issues with David Garrow winning the Pulitzer Prize for his biography on Martin Luther King. For a biographer who is much more aware of the complex life of Martin Luther King, I have objections to his “troubling” portrait of the black leader based on lewd statements made by people who have nothing but contempt for what he stood for. Needless to say, King’s noble legacy that the world can be changed through kindness and charity will stand the test of time and the baseless accusations of fools.

* Prakash Kona is professor of English Literature at the English and Foreign Languages University, Hyderabad in India. He is a novelist, essayist, poet and theorist.