Home » Pan-Africanism » Fidel Castro, a hero of our times

Fidel Castro, a hero of our times 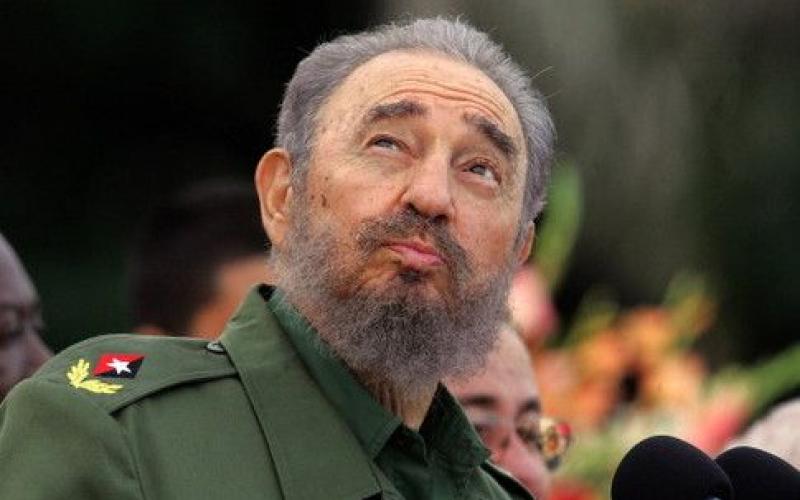 Vivid accounts of Castro’s brave encounters with the forces of oppression enabled people of diverse cultures and backgrounds to envisage waging similar struggles in their own terrain. Suddenly, revolution was seen as a possible and viable alternative to corrupt dictatorship in many developing countries.

To understand what Fidel Castro represented to the world, one has to evaluate what he did for the world.

He had a lot to say about the world, of course – lots and lots of words, which poured out of his mind, in speeches two or three hours long at a time.

But it's what he did that changed the world, especially Africa, that will for ever stand as a tribute to him that cannot be undermined with mere words, as his enemies would like to do.

For Castro played midwife to the birth of several African countries once oppressed by imperialism and colonialism. Among them are – Angola, Mozambique, Guinea-Bissau and the greatest prize of all (as far as Africa is concerned) – South Africa.

It was Fidel Castro's Cuba that sent 50,000 soldiers – from a tiny island whose population numbers only 11.2 million (2015 census) or roughly half the population of Ghana – to help African freedom fighters combat and defeat a mighty conglomeration of forces made up of racist South African troops, racist Portuguese troops and renegade African insurgent groups financed mainly by the United States Central Intelligence Agency (CIA). Cuba also helped the freedom fighters of Algeria and Zimbabwe; and even the Democratic Republic of Congo would be free of its protracted civil war(s)  today if its former leader, the late Laurent Kabila, had played his part when no less a person than Ernesto “Che” Guevara, Castro's alter ego, travelled there in 1965 to try and help Kabila's Lumumbist forces -- who  claimed to be following the progressive line laid down by the pioneering Congolese hero, Patrice Lumumba -- fight those of the CIA's corrupt  agent, Mobutu Seseseko.

Castro came to power in Cuba, a tiny island in the Caribbean, on New Year's Day 1959. He didn't achieve power in the ordinary way – say through a coup d'etat, or through a civilian uprising that spirals into a military rebellion and forces the government to quit power.

Fidel Castro's revolution was against a particularly corrupt dictator called Fulgencio Batista, and was carried out through guerrilla warfare, whose success depended on the integration of a group of urban intellectuals and their followers with peasants operating in the countryside.

The terrain where the Cuban guerrilla campaign began, the Sierra Maestra mountains, was rugged and fairly poor. Castro and his men arrived there by a rickety boat called “Granma” from Mexico and managed, through persuasion, to recruit guerrillas from the countryside to join their band. By being able to meld the small band of intellectuals with large numbers of peasants into a successful armed resistance movement, Castro unleashed an alliance of forces whose exploits played to the romantic imagination not only of the Cuban people but of oppressed peoples all over the world, who heard about the guerrillas' exploits.

Legends grew from vivid  accounts of the guerrillas'  brave encounters with the forces of oppression, and  enabled people of diverse cultures and backgrounds to envisage waging similar struggles in their own terrain. Suddenly, "revolution" was seen as a possible and viable alternative to corrupt dictatorship in many developing countries.

The Cubans had themselves been inspired by the classic methods of guerrilla warfare, evolved by the most successful revolutionaries in the world, Mao Tse Dong in China and Ho Chi Minh in Vietnam. Now, Castro joined the other two to dominate the narrative of guerrilla warfare in the 20th and 21st centuries.

As far as Africa is concerned, Cuba stands supreme because it was not only able to preach revolutionary victory against superior forces, but also to put theory to the test practically by donating actual flesh and blood to the cause of Africa's struggle against imperialism and racism.

In Latin America, countries like Nicaragua, Venezuela, the Dominican Republic, Bolivia and Guatemala (among others) also felt both the theoretical and practical influence of the Castro revolution in one form or another. Castro believed in exporting revolution. His willingness to help “Che” Guevara, his comrade-in-arms - to personify that principle and become a martyr to it in Bolivia -- demonstrates the depth of conviction with which Castro approached what he saw as his task in the world.

But who was Fidel Castro? He was born Fidel Alejandro Castro Ruz on August 13, 1926 in the eastern Cuban province of Oriente. His father was, of all things, a plantation owner - a fact whose ironical implications cannot be lost on anyone who studies Cuba's history. You see, after he won power, Castro instituted socialism in Cuba – which meant he implemented measures that included the  nationalisation of land and the seizure of plantations.

Fidel Castro (according to The New York Times) was "a boisterous young student who was sent away to study with the Jesuits at the Colegio de Dolores in Santiago de Cuba and later to the Colegio de Belén, an exclusive Jesuit high school in Havana. Cuban lore has it that he was headstrong and fanatical even as a boy. In one account, Fidel was said to have bicycled head-on into a wall to make a point to his friends about the strength of his will-[power]. In another often-repeated tale, young Fidel and his class were led on a mountain hike by a priest. The priest slipped in a fast-moving stream and was in danger of drowning until Fidel pulled him to shore”.

Heroism, in other words, came to Castro at an early age!  He entered the University of Havana in 1945 to study law, and almost immediately immersed himself in radical politics. A portent of Castro's future guerrilla activities was provided when, as a student, he took part in a dangerous  invasion of a foreign country - the Dominican Republic -  that unsuccessfully tried to oust that country's dictator, Rafael Rujillo.

From then on, Castro  devoted himself to Cuban politics and led quite a few student protests and demonstrations. After receiving his law degree,  Castro briefly represented the poor, often without charging them any money. In 1952, he ran for Congress as a candidate for the Cuban opposition Orthodox Party. But the election was scuttled because of a coup staged by a soldier called Fulgencio Batista.  Castro’s initial response to the Batista government was to challenge it with a lawsuit. Batista’s actions had violated the Constitution, Castro's affidavit said. But the attempt to remove coupist Batista by legal means was, of course, doomed to come to nothing.

Frustrated by the inability of the law to oust Batista, Castro, on 26 July 1953, organised a core group of radical students to attack a military barracks called Moncada in Santiago de Cuba. Many of the rebels were killed. Others were captured, including Castro and his younger brother, Raúl (the current Cuban President. At his subsequent trial,  Castro defiantly  declared:

“As for me, I know that jail will be as hard as it has ever been for anyone - filled with threats, with vileness and cowardly brutality. I do not fear this, as I do not fear the fury of the miserable tyrant who snuffed out the life of 70 brothers of mine. Condemn me; it does not matter. History will absolve me.”

Castro was sentenced to 15 years in prison. But Batista, in a bid to prove that he was “not a dictator,” released  Castro and his followers in an amnesty in 1954.

This was a great mistake, for shortly after his release from prison,  Castro went into exile in Mexico, where he plotted his return to Cuba with other malcontents. He bought “a beat-up 61-foot wooden yacht named Granma” in which  Castro and 80 other rebel leaders sailed  to the Sierra Maestra mountains in eastern Cuba, and cultivated contacts with the peasant population.

The rest, as they say, is history. They harried the forces of Batista with hit-and-run attacks, and eventually defeated the Batista army on New Year's Day 1959. Batista fled into exile.

Castro's popularity in Cuba was enhanced by his determination to enact health reforms, provide free education, and make it unlawful to practise racial discrimination (10% of the Cuban population is black and as elsewhere in Latin America, they had been at the bottom of the pile in Cuba's social setup, too).

Because of his influence in developing countries, the CIA tried many times to kill Castro - by, for instance, hiring agents to try and give him a cigar that exploded when lit; and providing him with  diving equipment sprayed with a chemical that would have made Castro's charismatic beard fall off! Many beautiful women were suborned to seduce and poison him but - most fell in love with him and refused to carry out the murderous  instructions of their pay-masters!

In all, over 600 attempts were reported to have been made to kill Castro. But none worked. Even a full-scale invasion, mounted on 17 April 1961 with 1,500 Cuban exiles recruited and secretly trained by the CIA which was launched  at a place called the Bay of Pigs failed and the CIA operatives were all either captured or killed.

And a US economic embargo that denied a host of consumer goods to Cuba also failed to oust Castro, despite the hardship that the embargo caused to the people. President Obama tried to begin dismantling the embargo and visited Cuba  in 2016. But the election of Donald Trump as President of the US means that hostility between the two countries may remain for some time to come.

The attempts on Castro's life – and regime – infuriated them and in 1962, Cuba allowed the Soviet Union to select sites for secretly stationing nuclear missiles on Cuban soil. The Americans detected these missile sites by satellite, and they mounted a quarantine of Soviet ships trying to enter Cuban waters.

For 13 days, the world was on the brink of World War Three – a thermonuclear war – as the US and the USSR stared "eyeball to eyeball" at each other, militarily. Eventually, a diplomatic solution was found that made it possible for the Soviets to withdraw their missiles without losing face. And the world was saved.

I met Fidel Castro in person when I went to Havana in September 1979 as a member of the Ghana delegation to a Summit Conference of the Non-Aligned Nations. I found him extremely intelligent but quite friendly - and humorous. Certainly, the world is the poorer for his passing. But he had a good innings - 90 years of age for a "dangerous" revolutionary on the hunting list of the CIA, must count as at least 900, in real terms!

* Cameron Duodu is a veteran Ghanaian journalist and author.