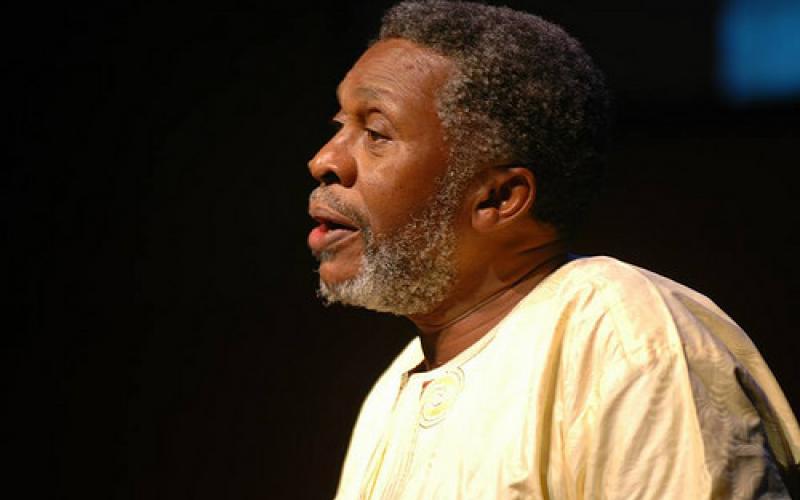 Prof. Campbell, a long-time contributor to Pambazuka News, is a distinguished voice in the struggles for freedom and justice of the African people. His inaugural lecture focused on African unity - a theme at the centre of Nkrumah’s political philosophy - and the need for a truly liberated Africa, so that the people can enjoy the wealth their land is endowed with.

The ceremony was interlaced with ace poetry recital, display by the Ghana Dance Ensemble and a choreography which depicted slavery and the consequent emancipation of African peoples.

The installation programme had in attendance many dignitaries from the University community, diplomatic corps, foreign and local students, Pan-Africanists, Nkrumists and some members of Kwame Nkrumah’s family.

In an inaugural lecture to climax the installation, Professor Horace Campbell, speaking on the topic “Reconstruction, Transformation and the Unification of the Peoples of Africa in the 21st Century: Rekindling the Pan African Spirit of Kwame Nkrumah” referenced Nkrumah’s profound call upon Africa to unite. He quoted Kwame Nkrumah in part: “Our objective is African union now. There is no time to waste. We must unite now or perish. I am confident that by our concerted effort and determination, we shall lay here the foundations for a continental Union of African States.”

This call by the African legend was rejuvenated exactly 50 years later during the Jubilee Anniversary of the African Union.  At this anniversary the heads of states of Africa made a solemn declaration to transform all aspects of Africa’s economy and make it “an integrated, prosperous and peaceful Africa, driven by its own citizens, representing a dynamic force in the international arena”.

This solemn declaration is called “Agenda 2063: The Africa We Want”. Agenda 2063 has 7 aspirations in 8 priority areas which are to be achieved through 5 ten-year implementation plans.

Professor Campbell, however, employing the true spirit with which Nkrumah spoke in May 1963 in Addis Ababa, extended the concept of Africa’s transformation and reconstruction to the more than two hundred million peoples of the Global African Family outside the geographical borders of Africa.

Following an emancipatory approach bequeathed by Nkrumah, Professor Campbell’s lecture reminded the audience of the intricate link between the emancipation and freedom of Africans and the freedom of humanity. This emancipation, he emphasised, should be realised through the unification of Africa.

Drawing from his recent book Global NATO and the catastrophic failure in Libya, the new Nkrumah Chair recounted the desecration of the body of the Libyan Leader Gaddafi whose Pan African efforts were laying the foundation for Africa’s central bank and common currency for the emancipation, unification and transformation of African peoples. He pointed out that NATO’s intervention in Libya under the disguise of “responsibility to protect” was to forestall this Pan African project.

In forging African unity, it was the contention of the professor that there should be a transformation which focuses on repair and reconstruction as the basis of economic, political and cultural relations. He explained transformation as rethinking and reconstruction in thought and actions about social and economic relations among humans and between humans and nature.

The third Nkrumah Chair then challenged Africa against western development models which have made the world almost inhabitable. He challenged Africa to use available technology and leap over the so-called stages of growth. This (quantum) leap borrowed from the physics of Albert Einstein is key to quantum politics and is linked with fractal optimism and fractal wisdom.

Professor Campbell drew attention to the continent’s rich resources and the need to harness these resources for the needed transformation. Particularly he stressed on the use the bio-potentials of Africa arguing that such endowment places Africa in a unique position in the bio-economy.

He also emphasized the importance of African languages in their diversity as a tool for unity, and transformation. The professor elaborated how biocolonialists and bioprospectors are studying African languages, its structure and mental basis through the Human Genome and the Human Cognome Projects. While the human genome project traces the migratory pathway of humanity, the Nkrumah Chair described the Human Cognome Project which “taps into the brains and cognition of Africans” as a new scramble for resources for the bioeconomy.

Professor Horace Campbell pointed out that the reconstruction and unification of Africa could not be obtained without transformation at political, economic, and cultural levels as well as transformations in gender relations guided by the Pan African spirit of Kwame Nkrumah.

The distinguished professor reminded the university to train the needed cadre of intellectuals and to be at the forefront of fertilising the seeds of knowledge for the freedom, reparations, and unity of African peoples.