Images of Ethiopians in history and religion: Ali Mazrui’s perspective 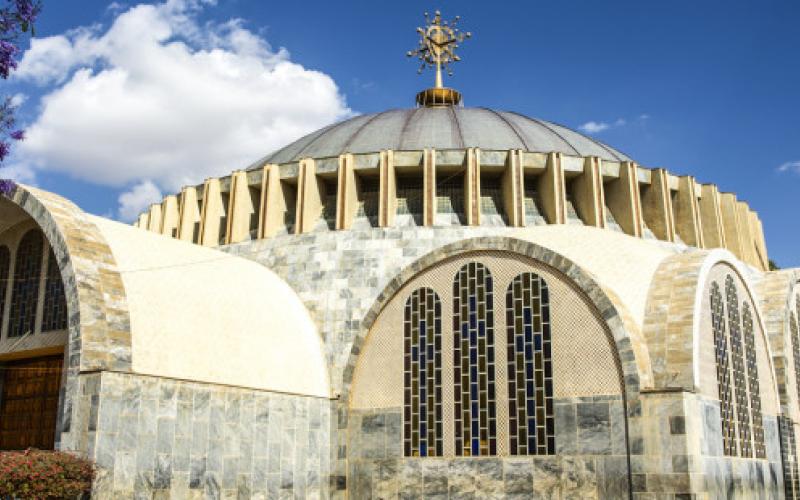 Thomas Jefferson should have known about Ethiopia.  That was what the late, great Pan-Africanist scholar Ali Mazrui suggested in his keynote address to a conference held at Cornell University in Ithaca, New York, in 2007.  I assisted Mazrui with research for that address and was honoured to travel with him to Ithaca and listen to his presentation as he reflected on Ethiopia with characteristic imagination and historical sensitivity.

The following is an excerpt from Mazrui’s speech.

Western images of Black people in earlier centuries portrayed Africans as a people without history, incapable of poetry, too intellectually retarded to philosophise, and too mentally slow to be scientific.

Let us explore this remarkable story of cultural achievement in the context of the four intellectual charges, which Westerners had long levelled against the African people – lack of history, lack of poetry, lack of philosophy and lack of science and technology.

Between history and poetry

The charge that Africans were a people without history went back to W.G. Hegel and beyond. There was no room for the African continent in Hegel’s Philosophy of History(1821).

This belief that Black Africa was ahistorical continued well into the second half of the 20th century.  As late as 1968, the Regius Professor of Modern History at Oxford University, Hugh Trevor-Roper, proclaimed his infamous dogma: “Maybe in the future there will be African history.  But at the moment there is none.  There is only the history of the European in Africa . . .The rest is darkness – and darkness is not a subject of history.”

Anybody with the remotest familiarity with Ethiopian history would surely not have made such a remark.  Even if Trevor-Roper knew nothing about Menelik I, or rejected the Solomonic credentials of the Royal Dynasty of Ethiopia, or accepted that the Queen of Sheba was part of Yemeni history rather than Ethiopian, Trevor-Roper should at least have known that the army of Menelik II defeated a European army from Italy at the Battle of Adawa in the year 1896.  If Ethiopians were a people without history, would they have been strong enough to defeat a European army early in the 20th century?

Indeed, as an expert on European Nazism and fascism, Trevor-Roper should surely have been more familiar with the rich history of Ethiopia long before Italy invaded and occupied it from 1935 to 1941.

With regard to the charge that Black people were incapable of great poetry, perhaps the most eloquent witness against the Black Muse was Thomas Jefferson, the author of the phrase “all men are created equal” in the American Declaration of Independence, who later became the third president of the United States.

In Jefferson’s Notes on the State of Virginia(Paris, 1784), there occurs the following astonishing observation: “. . . never yet could I find that a black man had uttered a thought above the level of plain narration, never saw even an elementary trait of painting or sculpture. In music they are more generally gifted than the whites with accurate ears for tune and time, and they have been found capable of imagining a catch.  Whether they will be equal to the composition of a more extensive rhyme or melody, or of complicated harmony, is yet to be proved.”

Jefferson then goes on to make more interesting observations about the link between pain and poetry.  He argues that pain is often a mother of poetry – anguish a stimulant to the Muse. In Jefferson’s own words: “Misery is often the parent of the most affecting touches in poetry.  Among the blacks is misery enough, God knows, but no poetry.  Love is the peculiar nostrum of the poet.  Their love is ardent, but it kindles the senses only, not the imagination. Religion has indeed produced a Phyllis Wheatley; but it could not produce a poet.  The compositions published under her name are below the dignity of criticism.”

Again, Thomas Jefferson knew almost nothing about Abyssinia.  While he was proclaiming that Black people were a people without poetry, he seemed supremely ignorant of the historical fact that Ethiopians were writing poetry long before Jefferson’s ancestors in the British Isles were taught the Latin alphabet by their Roman conquerors.

And so enterprising is the poetic tradition in Eastern Africa today that local newspapers receive not merely “Letters to the Editor” but also “Poems to the Editor” – from Dar es Salaam to Addis Ababa, from Mogadishu to Mombasa.

The third European allegation against the African people is that they were a race devoid of philosophers.  Father R.P. Tempels’ seminal book, Bantu Philosophy (1949), was supposed to be a great revelation that the African cultural heritage included collective philosophy, but not necessarily individual philosophers.  Once again the debate about whether Africa had philosophers almost totally ignored Ethiopia as a source of great thinkers and great theologians across the centuries.

The fourth basic European assumption had been whether the African peoples were a pre-technological ethnicity, incapable of scientific feats.   Indeed, Negritude as a modern philosophical and literary movement virtually takes pride in Africa’s pre-technological innocence; in the cattle-herder rather than the castle-builder.  In reality, Ethiopia had built the equivalent of Cathedrals.  She had carved out the sunken churches of Lalibela, a major engineering achievement.  Ethiopia had also participated in building the castles of Gondar. Ethiopia had also built impressive obelisks, which had been attractive enough to be stolen by such conquerors as Italy, at least for a while.

Ethiopians were thus a Black people who could successfully refute racist allegations that Black people were fundamentally ahistoric, apoetic, pre-philosophical and pre-scientific.

The remarkable story of Bilal

When the Prophet Muhammad began to preach the new religion to pagan Meccans, and the prophet and his followers were persecuted, Muhammad encouraged some of his followers to cross the Red Sea and seek asylum in Christian Ethiopia.  Among the refugees in Ethiopia was Uthman bin Afan, who later became the third Caliph of Islam after the death of Muhammad. Uthman is also credited with having ensured that there was only one authorised and authenticated version of the Qur’an before too many versions emerged.

Bilal, son of Rabah, was the earliest recorded Black African Muslim.  He was converted during the Prophet Muhammad’s own lifetime. He had been enslaved by other Arabs, and became fascinated by Muhammad’s message while he was still in bondage. According to some account, it was Abubakar, Muhammad’s disciple, who bought Bilal from his non-Muslim owner – in order to emancipate him.  Bilal rose to become one of the Prophet Muhammad’s most trusted disciples.  Bilal was an Ethiopian living in Arabia.

When in 630 C.E., Muhammad marched into Mecca with an army of ten thousand people, and conquered Mecca without a “shot being fired”, or a sword being drawn, Muhammad granted immediate amnesty to all Meccans who remained in their homes, or were under the roof of Abu Sufyan (Islam’s enemy just the day before) or sought asylum in the great mosque of Mecca, newly liberated for Islam returning home.

The Black man Bilal became the first muezzin of the newly Islamized Kaaba.   With his powerful voice, Bilal summoned believers back to the shrine which (according to Islam) Abraham had once built.  With that simple act of the prayer–call to the Kaaba, Bilal became a link between the past, the present and the future of the religion of Muhammad.  Since Abraham was unanimously accepted by Jews, Christians and Muslims as a joint founding father, Bilal’s voice from the Kaaba echoed the monotheistic aspirations of all three Abrahamic religions across the centuries.

Bilal became deeply involved in the unfolding history of nascent Islam.  In addition to serving as a muezzin, he also served as a preacher in peace time, and sometimes as a warrior when Islam was at war.

Bilal died a natural death and was probably buried in Aleppo in today’s Syria.  He was honoured as a soldier for Allah and a hero for the Ummah.

People of African ancestry world-wide have historically been accused of four congenital incapacities.  Each of those alleged incapacities have across the centuries been contradicted by Ethiopia’s own demonstrated performance.

The ultimate refutation of the four alleged incapacities have been the achievements of Ethiopia.  Are Black Africans a people without history?  Ethiopians have a recorded history across at least two millennia.  Are Black Africans a people capable of composing great poetry?  Ethiopians have been dazzling each other with great poetic compositions even before some of them were Christianised in the fourth century of the Christian era.  And when persecuted Arab Muslims sought asylum in Ethiopia in the seventh century, the refugees and their hosts probably recited to each other their respective sacred hymns.  The Ethiopian legend of Solomon seducing Sheba was itself pure poetry.

Are Black Africans a people capable of philosophising?  Ethiopians have philosophised about nature, God, the Ark of the Covenant, love, sex, and family long before Western Europe was introduced to the ancient works of Plato and Aristotle.

Are Black Africans capable of feats of science and engineering?  Ethiopians have left us obelisks, which tempted the greed of Italian invaders, and inspired the Washington monument in Washington, D.C.  Ethiopians have also left us the miraculous sunken churches of Lalibela.  The muezzin Bilal has many babies named after him in global Africa, and sometimes features in world literature.  May Ethiopians continue to inspire others.

* Doctor Seifudein Adem is the intellectual biographer of Ali Mazrui (1933-2014). He currently teaches at Doshisha University, Kyoto, Japan. He can be reached at <[email protected]>.