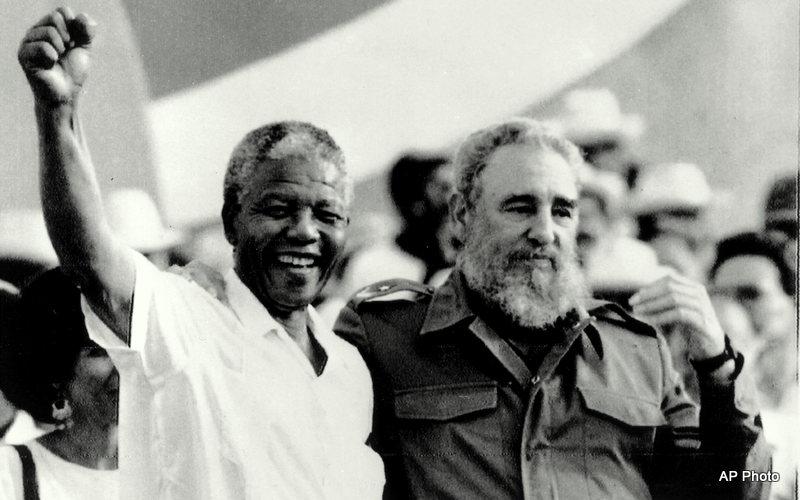 His anti-imperialist policies, socialist initiatives and strong internationalism have earned him a lasting place in world history.

The North American Delegation to the 8th Pan African Congress would like to express its solidarity with the Cuban people at the moment when Comrade Fidel Castro joined the ancestors. For over 60 years Comrade Castro gave leadership to first a rebellion and then a revolution after which he was appointed as Prime Minister and later as President and Commander-in-Chief of Cuba, First Secretary of the Communist Party of Cuba and Secretary General of the Non Aligned Movement. His anti-imperialist policies, socialist initiatives and strong internationalism have earned him a lasting place in world history.

Noted for many of the internal social policies which addressed the quality of life for Cuban people such as increasing the literacy rate to 98% and decreasing the infant mortality rate to 1.1%, Comrade Castro and the Communist party of Cuba gave leadership to the peoples of the Caribbean, Central and South America. Castro was an undying opponent of all forms of colonialism and provided moral and political support to the Puerto Rican Independence movement.

Among the African descendants, Fidel will be remembered for his unswerving support for the anti-colonial struggles.  Soon after the decisive victory of the revolution, in the early 1960s Comrade Castro  and the revolutionary leadership introduced a call for a “Marshall Plan” type program for Latin America. To counter this, the John F. Kennedy administration launched the Alliance for Progress to stifle the progressive initiatives of Cuba to support the oppressed of the American hemisphere.

It was among African Americans in the USA where the solidarity was manifest in numerous ways. Castro encouraged African Americans to visit Cuba, as a non-discriminatory country, and provided refuge for Pan African revolutionaries such as Robert Williams. Up to today, Assata Shakur is being protected in Cuba by the Cuban state. His visit to Harlem in 1960, talks with Malcolm X and other African-American leaders reaffirmed the growing ties between the two communities.

A decade later he was one of the first to support President Salvador Allende against the right-wing elements of the Chilean military. In many ways it was the solidarity of the African progressive forces that cautioned the USA against an open invasion after the Bay of Pigs debacle in 1961. After that it was reported that there were over 600 attempts at the life of Comrade Castro by the US intelligence services.

Comrade Castro had deep and abiding ties to Africa, beginning with his connections to the African descendent community in Cuba. After visits in the 1970s to Guinea and Algeria, he led Cuba to become a member of the Non-Aligned Movement, and encouraged revolutionary movements everywhere, including Vietnam and Palestine. Comrade Castro actively supported the liberation forces of Africa and sent military advisers to assist Angolan President Agostinho Neto in 1975. Cuba then strengthened its support of the revolutionary forces in Mozambique and Southern Africa. In 1977 Comrade Castro was able to tour Algeria, Libya, Ethiopia, Somalia, Tanzania, Mozambique and Angola and in each country was warmly greeted as a true friend of African liberation.

During the period of the Reagan and Thatcher counter-revolution, the CIA and apartheid intensified their efforts to crush the freedom fighters in South Africa and Namibia. When the United States and South Africa increased their support for the forces of UNITA in Angola and the MNR in Mozambique, the Cuban government dispatched over 25,000 troops to Angola which led to a major victory at Cuito Cuanavale. Fidel Castro personally worked with the commanders on the ground, and his military clarity during the battles at Cuito Cuanavale led to the decisive victory. This was the battle that changed the history of Africa and ended white minority rule in Namibia and South Africa. Afterwards Castro rightly stated that, “The history of Africa will be divided into before and after Cuito Cuanavale.”

Comrade Castro supported the Global Reparations campaign and his support for the position of the Caribbean position at the World Conference Against Racism in Durban in 2001 shifted the position of most of the progressive forces in Latin America to support the reparative claims of African descendants in the Americas. Pan Africanists remember Fidel Castro and the Cuban revolutionaries for their strong support for the health programs in Africa at a moment when the IMF and the World Bank called on governments to cut health expenditures. It was this tradition which was manifest in 2014 when Cuba dispatched thousands of doctors to West Africa to assist Africans in containing the Ebola virus.

The North American delegation of the Global Pan African movement salutes the bravery and focus of Comrade Fidel as we pledge to continue the fight against capitalism and racism.