Home » Pan-Africanism » What should reparations for slavery entail?

What should reparations for slavery entail? 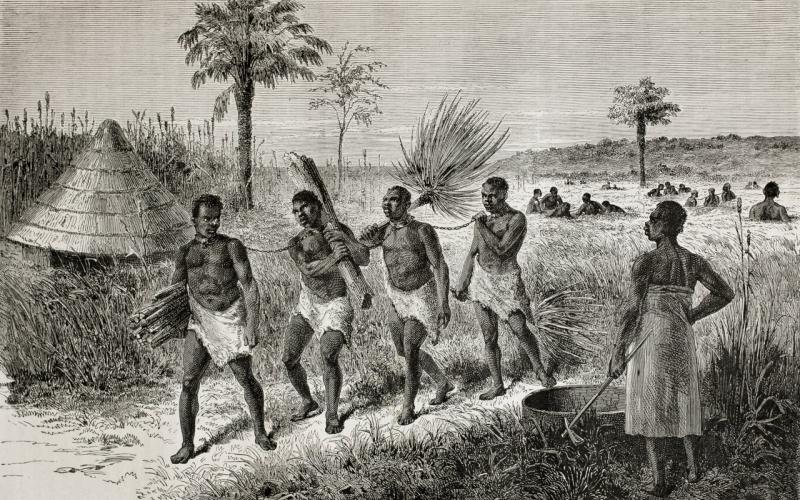 In the light of the former British Prime Minister’s dismissal of reparations, activists must push the debate further by detailing what reparations should entail. Fundamental to a reparations programme must be the fact that we transform the system of capitalism which slavery gave birth to.

Former British Prime Minister David Cameron’s insulting dismissal of trans-Atlantic slavery and his opinion that Africans and people of African descent should “move on from this painful legacy, and continue to build for the future,” would never be audaciously uttered to Jewish people by this arrogant warmonger who bombed Libya and sought to bomb Syria, but the British House of Commons voted against such action. As the African American actor Danny Glover said, the Jamaican government should tell Britain to "keep your prison, give us schools, give us infrastructure, not prisons." [1] In addition, the Jamaican government should ask Cameron to return all the professional Jamaicans who are teachers, lecturers, health workers, IT consultants, etc. to Jamaica – instead of the criminals. Moreover, Cameron should then pay the salaries of these Jamaican professionals whilst they develop the economy of Jamaica for the almost 400 years that slavery lasted. In short, we must confront the reality that one of the reasons why there is a brain drain in the Caribbean and Africa is the lack of decent and attractive salaries to retain African professionals. Britain can foot the bill to address this inequality that sprung from slavery and colonialism.

It is necessary to advance the debate on whether Britain and the West in general (i.e. all those slave trading nations such as France, The Netherlands, Spain, the USA, Portugal, etc.) should pay reparations: what should reparations entail?

Acknowledging the atrocity and enormity of this experience is necessary in an official apology. Commentators have observed how the Maoris received an apology from the British Queen in 1995.[2] In 2008 the Australian Prime Minister Kevin Rudd apologised in parliament to all Aborigines for laws and policies that "inflicted profound grief, suffering and loss".[3] It appears when it comes to Africans our lives, bodies and history do not matter. Racism will find various rationalisations (or excuses) to deny that enslavement of Africans merits an apology and reparations. Yet, we cannot erase the collective historical memory and experiences of enslavement that was wrought on people of African descent and continues with the covert and overt forms of racial discrimination that they still experience in the 21st century. Notions of racial supremacy and the inferiority of Black people are rooted in the brutal killings of Black males by white police officers in both the US and UK. Such notions stem from the legacy of slavery that gave rise to racist stereotypes harboured by racist societies that have institutionalised racism. Perhaps it should also be the case that in a programme of reparatory justice, there should be legal redress for the lives of the hundreds of Black men killed by racist police officers, as well as the people of African descent unjustly incarcerated in America’s prisons.

Whilst it is the case that no amount of financial compensation can address the psychological and emotional scars of enslavement of people of African descent, nor the horrors of the Middle Passage, nor those who remain buried in the Atlantic Ocean as a consequence of suicide, nor the 132 Africans deliberately thrown overboard in 1786 on the slave ship Zong - in order that the ship owners could claim the insurance  – a comprehensive economic package needs to address the fact that the current economic and technological underdevelopment of Africa and the Caribbean is symptomatic of the impact of 400 years of enslavement. This enslavement was followed by the brief but no less damaging interlude of colonialism and must be recognised as central to any form of reparations.

There are those who refuse to accept the fact that the economic wealth of Europe was built on the sweat, blood and toil of African people to the detriment of Africa. Yet, let us be clear that the trans-Atlantic slave trade was not a “trade”. The meaning of “trade” supposes equal benefit to both parties.  It was not “trade” but the looting of Africa in which Europe benefitted at the expense of Africa as Walter Rodney graphically illustrates in his acclaimed book, “How Europe Underdeveloped Africa.”  The consequence for Africa was and remains that “the African economy taken as a whole was diverted away from its previous line of development and became distorted.”[4]

Reparations is therefore a quest to repair the economic damage of underdevelopment wrought by the process of enslavement and colonialism. This economic redress will be symbolic for it may run into trillions of dollars, for one can never place an economic value on the millions of Africans whose lives were lost in the slave raids, or as they died in the long march to the forts on the coast. How many died on such journeys? Can we account for those enslaved women who secretly aborted or killed their child to prevent them from experiencing slavery? And should we not include the medical experimentations carried out on the bodies of enslaved African women graphically documented in the books “From Midwives to Medicine” and “Medical Apartheid”? [5]

As for the psychological impact of enslavement, that too is another site of struggle that people of African descent must address through spiritual and psychological healing as well as education in which they reconnect to understanding and learning about their history prior to enslavement.  For it is essential for Africans and the world to know that Africans had a rich and complex history prior to the holocaust of the trans-Atlantic slave trade.

Also, it is important for us to remember that on the ending of slavery in the British colonies, the British government were able to compensate the slave owners £20 million (£20 billion in today’s money). There was no compensation for the former enslaved African men and women. In the USA there were pledges to the freed men and women of “forty acres and a mule” that never materialised across the board.[6]

Hence, we need to address the question: What should reparations for slavery entail? It should address the following:

First, an apology to all continental Africans and people of African descent for the immorality of slavery, for merely stating “regret” – as the former British Prime Minister Tony Blair did in 2007 - is mere cant.[7] The former Jamaican Prime Minister P. J. Patterson stated recently in an open letter to David Cameron: “Contrary to your view, the Caribbean people will never emerge completely from the “long, dark shadow” of slavery until there is a full confession of guilt by those who committed this evil atrocity.”[8]

Second, we must demand that all Western governments instruct Western museums and citizens to hand over to African countries illicitly acquired African artefacts languishing both publicly and privately in their hidden vaults. They must also provide the training and facilities for African countries to host, display and conserve these returned items. This includes thousands of artefacts, among them being the more famous and well known 400 Ethiopian treasures looted by British soldiers during the 1868 Magdala expedition. [9] There are also the Benin bronzes looted in the British invasion of the Nigerian kingdom of Benin in 1896.[10] Kwame Opoku has diligently written on the need for these and many other African artefacts to be returned to African nations.

Third, as mentioned above, the brain drain of African and African Caribbean professionals should be halted by offering these professionals the same salaries to voluntarily return to Africa and the Caribbean in order to assist in the building of new schools, universities, hospitals and clinics that would be set up and financed by a comprehensive reparations economic programme.

Fourth, cancellation of all debt incurred by the Caribbean and African nations on the grounds that they are odious and were not incurred by the ordinary citizens of Africa and the Caribbean but rather their ruling classes. Cancellation would free up these critical funds to address the real needs of African citizens. Moreover, it is the case that Africa loses approximately $50 billion a year through illicit financial flows out of which are draining foreign exchange reserves, reducing tax collection and deepening poverty. This colossal amount may well be short of the reality as accurate figures do not exist for all African countries. However, it is approximately double the official development assistance (ODA) that Africa receives.[11] In short, aid is simply a paltry and ineffective band aid that keeps African economies in a continued process of economic subordination to neoliberal capitalism under the illusion that there will be “trickle down growth.” Blocking the haemorrhaging of illicit financial flows and tax dodging would ensure there are funds and resources to build railways to connect African people and economies; invest in adult education that is almost non-existent in Africa compared to primary, secondary and university education; massively expand electrification, greener energy forms for ordinary citizens and provide employment for African people, particularly the youth.

Overall, a dialogue within progressive activist circles and among progressive Europeans, genuinely committed to addressing the profound inequities of the trans-Atlantic slave trade and colonialism needs to begin. Farmers, women’s groups, young people, people with disabilities, LBGTI individuals, academics, professional people in the Caribbean and Africa must be involved in this trans-Atlantic dialogue on what reparations should entail, as well as, creating progressive governments and leadership (compared to the current compliant neo-colonial incumbents), to push for a reparations programme.

Ultimately, in addressing the issue of reparations, we must also address transforming the system of capitalism which slavery gave birth to. A rupture with this unequal and exploitative system is fundamental in eliminating oppression that remains with us in the twenty first century in reconfigured forms.

* Dr. Ama Biney is a historian and political scientist living in UK.

[5] See “From Midwives to Medicine The Birth of American Gynecology” by Deborah Kuhn McGregor, published by Rutgers University Press, 1998; Medical Apartheid The Dark History of Medical Experimentation on Black American From Colonial Times to the Present? By Harriet A. Washington, Doubleday, 2006.