Zambia must clarify whether it will host Israel-Africa summit 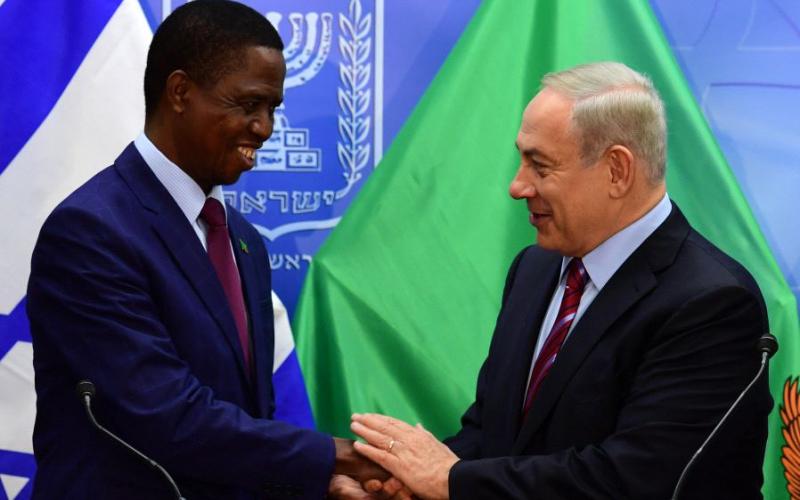 The Southern African state is one of the few countries within in Africa with a military attache stationed in Israel where it opened an embassy in 2015. Israel does not have an embassy in Zambia. Holding an Israel-Africa summit in Zambia would represent a tremendous setback in Africa’s historic support for the oppressed Palestinian people.

These reports first surfaced during the inauguration ceremony for Kenyan President Uhuru Kenyatta in Nairobi. President Lungu attended the second induction into office of Kenyatta who is the leader of East Africa’s largest economy.

Lungu met with Israeli Prime Minister Benjamin Netanyahu on the sidelines of the Kenyatta inauguration events. The Zambian leader was photographed shaking hands with Netanyahu during the meeting.

A similar summit was scheduled earlier in 2017 in the West African state of Togo. However, mass demonstrations by Togolese opposition parties and coalitions demanding the resignation of the government of President Faure Gnassingbe for undemocratic practices, forced Lome to postpone the announced summit.

Zambia’s largest newspaper the Times reported on December 5 that: “President Edgar Lungu, who met Israeli Prime Minister Benjamin Netanyahu last week at the re-inauguration ceremonies for Kenyan President Uhuru Kenyatta in Nairobi, told ZNBC that ‘For whatever reason, we have been given the mandate to host this summit which will bring its own benefits to Zambia.’ President Lungu said Prime Minister Netanyahu had asked Zambia to host an Africa-Israel summit that was originally scheduled for Togo in September.”

Despite this claim of mystification by President Lungu, it is quite obvious that there were definite reasons why Zambia was targeted to host the meeting. The Southern African state is one of the few countries within the AU which has a military attache stationed in Israel where it opened an embassy in 2015. Israel does not have an embassy in Zambia.

Lungu paid a state visit to Israel in February 2017. The president was accompanied by a large delegation of ministers from his administration.

After his return to Zambia, Lungu was quoted in the Times as saying: “Israel is a pacesetter in survival instinct because it has a desert; but they have a thriving education, agriculture and information and communication technology sectors and we can explore and learn from them. A lot of benefits are expected out of this trip.”

Unfortunately, no statement was recorded in the same publication which cites the plight of the Palestinian people who share a similar history with Africans as it relates to colonialism and imperialism. Israel under successive leaders since 1948 has collaborated with the same white supremacist forces which conquered, exploited and oppressed African people and their descendants throughout the world.

The Times then quoted Israeli Prime Minister Benjamin Netanyahu while he was in Kenya for the inauguration of Kenyatta as emphasizing in regard to Zambia that Tel Aviv’s aim was to: “deepen its cooperation with the country, which I think is important for both our countries and both our peoples. I know that you’re opening a Jewish history museum in Zambia and soon a synagogue in the capital city. I hope one day I have the opportunity to visit those institutions and to visit Zambia.”

Africa and Israel: A comparative history

Although Jewish people were subjected to national discrimination in Europe and the United States during the 19th and 20th centuries, today since the recognition of the State of Israel by the United Nations in May 1948 most people do not consider them to be an oppressed people.  However, it is important to make a distinction between Judaism as a religion and Zionism as an ideology and political movement.

In fact when the founders of the World Zionist movement began in the later years of the 19th century, its leaders specifically sought to align themselves with the rising tide of colonialism throughout Asia and Africa. During the early phase of the Zionist movement Palestine was not the only location examined for the establishment of a Jewish state. (See Weizmann and Smuts: A Study in Zionist-South African Cooperation. Institute for Palestine Studies Monograph No. 43, 1975)

Other areas considered by the Zionists included territories in Africa such as modern-day Madagascar, Uganda and Libya. By 1917, British Foreign Secretary Lord Balfour issued his famous declaration which mandated the creation of a state for the Jewish and Arab peoples in the-then colony of Palestine. Most historical literature on this territory prior to 1948 referred to the area as Palestine. (https://www.globalresearch.ca/palestine-israeli-foreign-policy-and-the-pan-african-movement/5333199)

Nevertheless, when the State of Israel was recognized by the UN it was done so as exclusively a Jewish state where millions of Palestinians had been forcibly removed and disenfranchised. In 1948, the UN was dominated by the European colonial powers and the U.S. The Soviet Union, whose military had made the greatest contribution to breaking the expansionist program of the Third Reich under Adolph Hitler, also voted in the UN to recognize the Jewish state in Palestine.

The overwhelming number of colonies in Africa did not gain their independence from European imperialism until after World War II with the upsurge of national liberation movements in Sudan, the Gold Coast (Ghana), Algeria, Tunisia, Kenya, Angola, Southern Rhodesia (Zimbabwe), Northern Rhodesia (Zambia), Southwest Africa (Namibia), etc. After the century-long existence of the Atlantic Slave Trade which uprooted millions of Africans from the continent to Europe, North America, Central America, the Caribbean and South America, the advent of classic colonialism was imposed on the continent.

During 1884-85, the Berlin West Africa Conference was held in Germany. This gathering carved up Africa among the imperialist powers. It would take over a century to bring about the independence of the continent with the Republic of South Africa overthrowing the racist apartheid system in 1994. At present only the Western Sahara, the Sahrawi Arab Democratic Republic (SADR), remains under the colonial control of the North African monarchy of Morocco.

After the 1956 Suez Canal war when Britain, France and Israel invaded Egypt under President Gamal Abdel Nasser in order to retake control of this strategic asset, the political sympathy of most African states has shifted solidly in the direction of the Palestinian and other Arab people.

Later, as a result of the Egypt-Jordan-Syria wars with Israel in 1967 and 1973, a majority of independent African governments and national liberation movements broke relations with Israel. The Palestine Liberation Organization (PLO) is viewed by progressive forces throughout Africa as the de facto representatives of the people. After the signing of the Oslo Accords between Israel and the PLO in 1993 which gave rise to the Palestinian Authority, there has been a period of thawing relations between Tel Aviv and some African states.

However, African solidarity with Palestine remains strong. The Republic of South Africa under the ruling African National Congress (ANC) continues to be a bulwark of sentiment in favor of the recognition of an independent Palestinian state. This mood has existed in Zimbabwe as well during the 37-year presidency of Robert Mugabe, the former leader of the Zimbabwe African National Union Patriotic Front Party (ZANU-PF).

When on December 6 U.S. President Donald Trump issued his executive order to move the American embassy from Tel Aviv to Jerusalem mass demonstrations in solidarity with the Palestinian people have been held throughout the world. The three leading alliance partners in South Africa, the ANC, South African Communist Party (SACP) and the Congress of South African Trade Unions (COSATU) have all issued statements decrying the policy decisions of Trump.

The U.S. government is the staunchest supporter of the State of Israel providing billions of dollars in assistance and military hardware on an annual basis. Egypt, due to military and political considerations ranks as the second largest recipient of direct aid from Washington. However, Africa as a whole can in no way compare to the economic, military and diplomatic support which is received by Israel irrespective of the fact that people of African descent in the U.S. are numbered in excess of 40 million inhabitants.

Consequently, the holding of an Israel-Africa Summit in Zambia would represent a tremendous setback in the progressive legacy of independent states on the continent. At this critical stage in international relations AU member countries should be intensifying their cooperation with other fraternal governments and peoples on the continent and indeed throughout the world.

* ABAYOMI AZIKIWE is the editor of Pan Africa News Wire.