The decolonisation of Western Sahara: A Saharawi vision of the solution 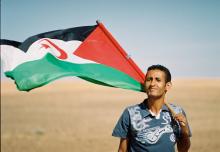 After 43 years of failing to legalise its invasion of Western Sahara, Morocco needs to accept a process that would lead to a just, lasting, realistic and mutually acceptable solution to the aspirations of the Saharawi people.

Morocco and the AU: When the King adds insult to injury

Morocco is seeking to rejoin the African Union, but its motives are suspect. As suggested by an arrogant letter to the AU Chairman, Rabat could be intending to use its membership to strengthen its colonial claims over occupied Western Sahara, an AU founding member state. Moreover, as an ally of Western powers Morocco could be used to sabotage effective African unity from within the AU.

The African Union position on Western Sahara is getting stronger day after day, but it also reveals all the weaknesses of Africa when it comes to imposing its own decisions and positions on critical issues.

The fate of Western Sahara, under brutal occupation by Morocco and whose resources are plundered by this colonial power working in cahoots with Western and even some African governments, remains a big shame in Africa’s quest for total liberation and unity. Africa is not free as long as the Saharawi people remain under colonialism.

The UN has over the past decades appeared to pursue a just solution to the crisis in Western Sahara, Africa’s last colony still illegally occupied by Morocco. But it now emerges that Moroccan diplomacy at the world body has employed corruption to push its agenda against Western Sahara.

In introducing this second special issue on the occupied Western Sahara in Pambazuka News, Malainin Lakhal argues that it is ‘a subject that should concern all Africans, and all actors who know that Africa can never rise up as a Union or as a future power unless it jointly struggles for its freedom from poverty, ignorance, re-colonisation, foreign exploitation, internal rivalry, and lack of communication between all its peoples and elite.’

Western Sahara : Realpolitik to the rescue of colonization?

Is it possible to cure cancer with aspirin? Can we do justice in a murder by relentlessly “assaulting” the victim's body looking for excuses to the murderer?

The UN has adopted around hundred resolutions reaffirming the Sahrawi people’s right to self-determination. Yet Sahrawis are still denied the legitimate and fundamental right to vote on the fate of their homeland.

After bitter debate within the Security Council, and strong pressures from France to avoid any kind of progress in the resolution of the conflict in Western Sahara, the member states of this “non-democratic” international body adopted a new resolution completely void of any sense or reason.

UN must include human rights component to MINURSO

Torture and other inhuman and degrading treatments, arbitrary arrest and detention, forced disappearance, the use of rape as a mean of intimidation, are current practices committed by the Moroccan authorities against Saharawi adults and children.