Charter of the North African Network for Food Sovereignty 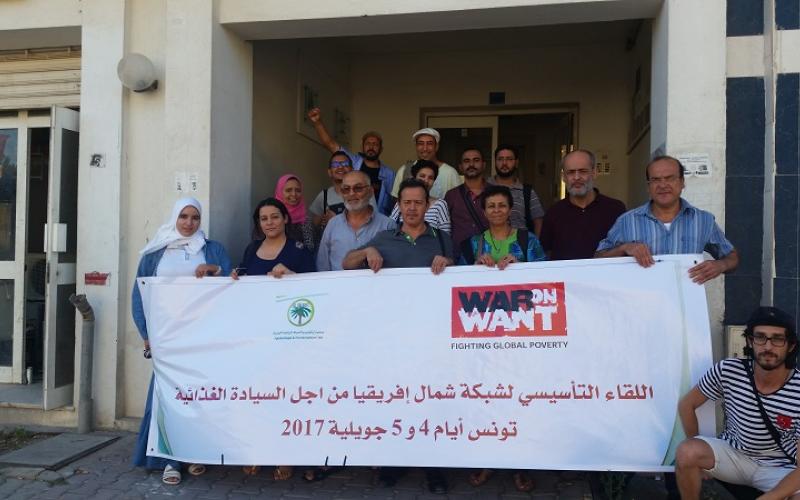 Activists from anti-capitalist militant organizations in North Africa met in Tunis on 4th and 5th July 2017 to set up the North African Network for Food Sovereignty. The network is a unifying structure for struggles in the region and will be involved in local, continental and international mobilisation.

The network has adopted the following Charter:

Food sovereignty is the human right of peoples as individuals and communities to define their own food systems. It means, working with nature and protecting resources to produce sufficient, healthy and culturally appropriate food by:

Food sovereignty is tied to the right of people to self-determination at the political, economic, social, cultural and environmental levels. It is also linked to a rupture with imperialist centres and international financial and trade institutions as well as to the struggle against regimes and governments that implement these policies to the benefit of foreign and domestic capital.

Food sovereignty is incompatible with agro-business, a system that is partly responsible for the destruction of natural resources and the climate chaos threatening the livelihoods of millions of people.

Unfortunately, food sovereignty has being undermined for decades in our region (North Africa). This process started in the colonial period and is being reinforced by neo-colonial, productivist and extractivist policies implemented in the name of development. This situation is worsened by different programmes of harsh neoliberal adjustments and by submission to conditions imposed by the World Trade Organisation as well as to terms of trade agreements with the European Union, United States and others.

Our region is subject to the hegemony of international financial capital and imperialist domination that are responsible for the ecological crisis, climate change and the pillaging of resources.

In order to address this situation and break away from this hegemony and in accordance with the above, we agree as follows:

2. The network is a horizontal structure that is democratically organized, open to all organizations working in the North African region in accordance with this Charter.

3. The network strives to achieve food sovereignty, climate and environmental justice. It will fight for the establishment of a new system that will end human exploitation and the destruction of life while satisfying people’s needs in a participatory and democratic framework that is in harmony with nature and inspired by buen vivir principles (living well).

4. In order to reach these goals, the network will put in place all possible militant actions: critical studies; campaigns, workshops, direct actions as well as networking, coordination and solidarity with ally movements that fight for the same objectives.

5. The network shall coordinate and work in synergy with all anti-capitalist struggles that fight resources dispossession, enslavement of peoples and against all kinds of segregation and racism at the national, continental and international levels.

6. The network aims to build alliances and tight relations with organizations fighting for food sovereignty in the region, the continent and worldwide.

7. To facilitate its functioning, the network shall set up a coordination that will comprise a representative from each organization present during the founding meeting.

8. The coordination ensures democratic and transparent functioning of the network for a period of one year. It is the representative and the spokesperson of the network and is responsible for its administrative and financial management as well as being in charge of maintaining the website and publishing reports and studies.

9. Prior to the expiration of the term (one year), the coordination has to draft a statute and bylaws (internal regulations) to be validated democratically.

Tunisia is temporarily the head office of the network.

10. At the end of that period (one year), the coordination will put in place structures that are in accordance with a legal statute that will be democratically validated.

Organisations and associations participating in the founding/constitutive meeting

National Initiative for the Support to Cooperatives (Egypt)