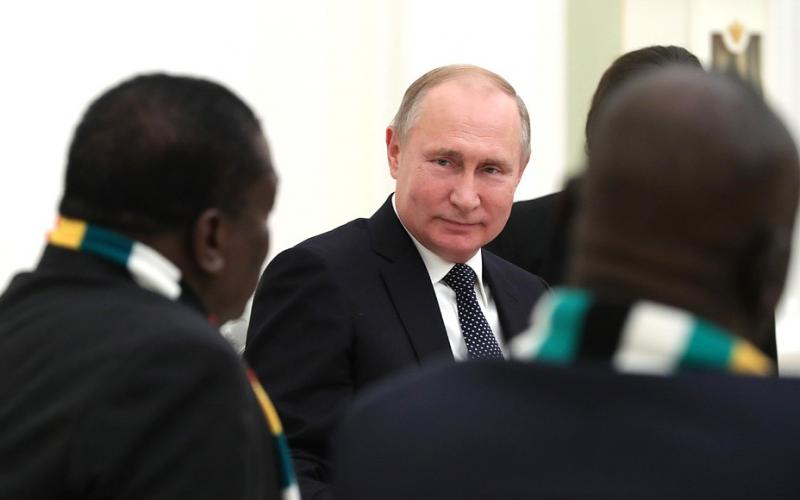 A number of African countries facing internal politico-economic challenges including Zimbabwe are turning to Russia not only for financial help in terms of investments and loans, but also for political support.

Like many African countries, Zimbabwe’s economy needs sustainable resuscitation. On his mid-January official working visit to Moscow, President Emmerson Mnangagwa toldSputnik News Agency(SNA) in an interview: “We have always had cooperation in the field of defence and security with Russia. This we are not abandoning. At the moment, we don’t have much economic muscle to buy such things which we would want to buy from the Russian Federation.”

“But down the line, as Zimbabwe becomes stronger in terms of its economic muscle, we should be able to buy the type of military hardware, which we know the Russian Federation has and is the state-of-the-art type of equipment that they have, we are not in a hurry,” Mnangagwa added.

By his words, President Emmerson Mnangagwa set the tone and precedence by adhering to the principle “African problems, African solutions” formulated by African themselves which Russia supports.

With many African elites, at least, during the past decade, Foreign Minister Sergey Lavrov has held in-depth discussions on the current situation in Africa and always point to the possibility of continuing to promote effective bilateral cooperation in many spheres and to work together towards fully using existing potentials. He always reminds that Moscow firmly supports the principle formulated by the African countries, “African solutions to African problems.”

According to many experts, most often talked about is economic diplomacy. What is abundantly clear is how to stimulate African governments into exploring investment opportunities in Russia and Russian investors into Africa within some framework of mutual-cooperation.

Professor Vladimir Shubin, the Deputy Director of the Institute for African Studies, told me several years ago that “African leaders have to pay high attention to and take significant steps in promoting their achievements and highlighting their most development needs.”

In an acknowledgement, he said Africa has a great potential for bilateral relationships with Russia. But the relations in many spheres, especially in economic cooperation, are lagging behind.

Shubin, however, pointed to the truth that “Africans have to acknowledge the fact that the world has progressively changed and they must be seen changing with the similar positive pace. It’s about time Africans have to take development issues seriously and work progressively towards establishing good governance and drastically seek improvement in the welfare for its large impoverished population.”

President Vladimir Putin pledges to help Zimbabwean counterpart President Emmerson Mnangagwa “to stabilise the political situation” by investing in the country. Zimbabwe has been looking for foreign investment in installing its energy, building infrastructure, modernising agriculture and industry – foreign investors who could offer the necessary boost to employment creating sectors.

Quite recently, Vyacheslav Volodin, the Chairman of the State Duma, told an instant meeting held with the Ambassadors of African countries in the Russian Federation, that Russia would take adequate steps to deliver on pledges and promises with Africa countries. “We propose to move from intentions to concrete steps,” he said.

Zimbabwe’s Ambassador to Russia, Major General (rtd) Nicholas Mike Sango, told me in an interview discussion that, “For a long time, Russia’s foreign policy on Africa has failed to pronounce itself in practical terms as evidenced by the countable forays into Africa by Russian officials. The Russian Federation has the capacity and ability to assist Africa overcome these challenges leveraging on Africa’s vast resources.”

Mike Sango further expressed his views as follows: “Africa’s expectation is that Russia, while largely in the extractive industry, will steadily transfer technologies for local processing of raw materials as a catalyst for Africa's development.”

He said that the country was open to investment in energy and transport, including the construction of railways and highways, and was looking to attract and secure foreign investment and cooperation to transform the country's economy.

Zimbabwe’s key priorities were summarised as follows (in order of priority):

Energy: For industry and commerce to thrive there has to be sufficient power. Presently, Zimbabwe has a power deficit of 750 MW. The most reliable source is the 750 MW Hydro power plant, which has been affected by low water levels due to two years of drought. The country is relying on power imports.

Manufacturing: Zimbabwe’s manufacturing sector has been hit hard by illegal economic sanctions. Most industries have out-dated and expensive to run machinery. They are in dire need of retooling, refurbishment and funding.

Tourism: Zimbabwe hosts one of the wonders of the world, the Victoria Falls. Investment in infrastructure development in the hotels would complement the opening by larger airports to accommodate larger body aircrafts.

Zimbabwe, a landlocked country in southern Africa, shares a 200-kilometre border on the south with South Africa, bounded on the southwest and west by Botswana, on the north by Zambia and on the northeast and east by Mozambique. Zimbabwe is a member of Southern African Development Community.