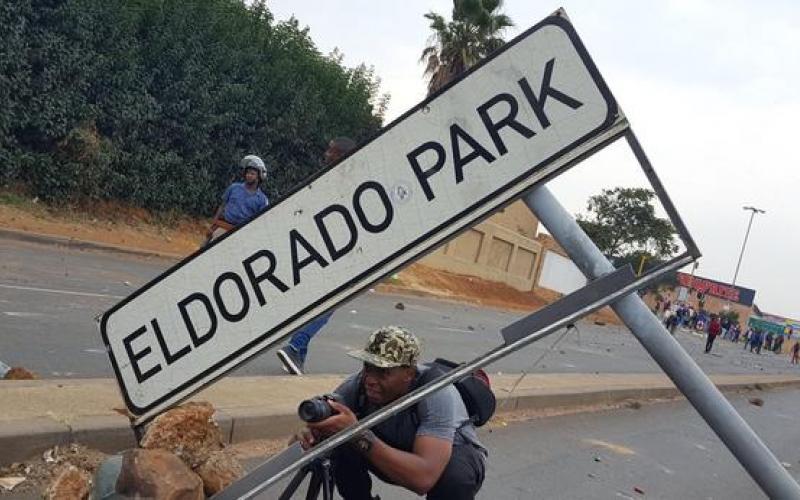 The hope that the end of apartheid would herald a better life for the oppressed in South Africa has evaporated. Their conditions today are materially as bad as under apartheid - and even worse in some cases. But the upper classes are having the time of their lives. Working class struggles should be intensified and linked, based on self-organising and direct democracy to bring about real change.

Wave after wave of community protests have been taking place in South Africa from Orange Farm in the Vaal, to Eldorado Park outside Johannesburg, to Khayelitsha in Cape Town. People are angry that after more than 20 years of so-called freedom they are still confined to living in shacks, having to shit in communal plastic toilets, sharing a standpipe for water with thousands of neighbours, and having essential services terminated when they can’t afford to pay.

What fuels this anger further is that on the other side of the cities and towns of South Africa, in the old white-only suburbs, the elite and middle classes flaunt their wealth. In such suburbs people live in the lap of luxury – well-manicured gardens, swimming pools, maid’s quarters and luxury cars are the order of the day. Under such circumstances, it is not hard to see why South Africa is ranked as one of the most unequal societies in the world; it is literally in your face.

Yet the ruling class – white and now black capitalists, top state officials and politicians – have waged an incessant war against the working class, and the black section in particular, to deepen this inequality. The reason they have done this is to increase their wealth – this class war lies at the root of the protests we have seen.

Many of the people that have been involved in the recent waves of protests – or their parents – had hoped for a better life with the fall of apartheid. Under that vile and horrific system, the black working class (workers and the unemployed) was subjected to a harsh racial oppression and exploitation. It was cheap labour, in the form of the black working class, which generated huge profits for corporations – owned by foreign and local white capitalists. To ensure the lowest costs of the reproduction of this exploited class, the apartheid state forced people to live in homelands and townships in which the most threadbare services were provided. The consequences were that the black working class was deliberately mired in poverty and when they rose up they faced the gun barrels of the apartheid state.

Fast forward to today. One can scarcely believe the reality in which the black working class finds itself in today, which materially is as at least as bad as under apartheid and in some cases even worse.

As part of this, since 1994, the portion of Gross Domestic Product which goes towards wages has declined. The implications of this are that in real terms the wages of the black working class have been in decline since the fall of apartheid. With this too, unemployment has exploded as capitalists in South Africa have reduced their labour force, mechanised, and implemented flexible labour to boost profit rates.

The post-apartheid state has been central to the war on the black working class. It has actively redirected wealth upwards towards the ruling class. It has done this through various means, which have included massive spending on infrastructure for corporations, the introduction of laws that allow labour flexibility and tax breaks for corporations. In fact, since 1994 the tax rate for corporations has been driven down from 49% to 28%. This is money that could have been used to improve the lives of the poor through providing, amongst other things, decent services and housing. At the same time, however, Value Added Tax, a tax that targets the working class, has contributed a larger and larger part of the state’s revenue. Far from being an under resourced and poor state, the South African state has actively been shifting wealth from the working class to the ruling class at an increasing rate.

At the same time as assisting the rich, the state has also been very active in attacking the poor. In real terms (inflation adjusted) spending on services for the working class, and the black working class in particular, has remained largely stagnant and in some cases even declined since 1994. As a matter of fact, on average the state under the ANC has allocated less than 2% of the budget to housing for the working class. As such, services like water, electricity, housing, sanitation, healthcare and education for black working class areas, including places such as Eldorado Park, Ennerdale, and Orange Farm, are a shambles. The national state under the stewardship of the ANC has also dramatically reduced the amount of money that it transfers to local governments to deliver services such as sanitation and refuse removal. This has been done to please international capitalists in the form of speculators. Speculators tend to target buying the bonds of states with low debt levels. To keep debt levels as low as possible at a national level, the South African state slashed transfers to local governments.

This means local municipalities have less in real terms for service delivery. To try and generate income, local governments across South Africa have aggressively adopted cost recovery for services to the working class, such as electricity, water, sanitation and refuse removal. The consequences are, if you can’t afford to pay you don’t get the services. Linked to this, more cruelly, pre-paid metres have been installed in working class areas across the country and cut people off from the basics of life, such as water, if they can’t pay. This is a form a systemic violence that degrades the everyday lives of people.

While doing this, however, most municipalities spend funds derived from their cost recovery schemes to build and maintain infrastructure for corporations. In cities like Cape Town, central business districts are kept plush, while the townships remain in a state of degradation. Local governments too continue to allocate far more resources per household to formerly white suburbs than townships. This means, insanely, the Johannesburg Municipality per household spends more on Sandton than it does on Soweto.

Making matters worse is that at the level of local government, municipalities have followed rabid outsourcing of basic services. For a connected local elite, usually linked to the African National Congress or in some areas the Democratic Alliance, this has been a godsend. This has seen contracts for housing and service delivery at a local level being handed out to those who have connections to politicians. Nepotism, corruption and patronage have become rife; and so too has graft. The consequences of these neoliberal policies at a local level is that service delivery is abysmal.

The reality is that the state does this, at a local and national level, because it is an instrument of the ruling class. States only exist to enforce the rule of a minority elite over a majority. Even in a parliamentary democracy, it is the elite that indirectly and directly control the state and they use it to increase their wealth and bolster and solidify their power. In the case of South Africa, politicians also use the state directly for self-enrichment.

Of course states do provide some services to the poor. These are and were, however, concessions that have been forced on the ruling class by the working class through the history of struggle. Indeed, the black working class only receives some support from the state – although meagre – because of the history of struggle in the country. Under neoliberalism though, these concessions are being rolled back, and it is this that is once again fuelling protests.

The role that the state plays in protecting the ruling class can be seen in how the police have reacted to the protests. Most people involved in protests usually try to follow the state’s prescribed procedures to air their grievances, for example engaging in Integrated Development Plans and petitioning local councillors – and only embark on protest once these proved to be dead-ends; which they inevitably do as the state and politicians could not give a crap about the plight of people except at election time. But once people protest, as we have seen, the police react violently, firing rubber bullets, tear gas, stun-grenades and even live bullets at protestors – protestors, who it must be remembered, are merely asking to receive the basics of life.

The working class, however, has proved that it won’t lie down under the fire from the ruling class. This is where hope lies. What is needed now is for these struggles that we have been seeing across the country to link, based on self-organisation and direct democracy. There are many challenges to this, including toxic party politics, but if society is too change it will have to be done. Indeed, the fire of resistance needs to burn; and to do so struggles need to link and become a force capable of blunting the attacks of the ruling class in South Africa. Through this, hopefully, a basis can be set for a broader struggle against exploitation and all forms of oppression; and for human liberation in which no-one lacks the basics of life such as housing, water, and sanitation.

* Shawn Hattingh works as a Research and Education Officer at the International Labour Research and Information Group (ILRIG) in Cape Town, South Africa.