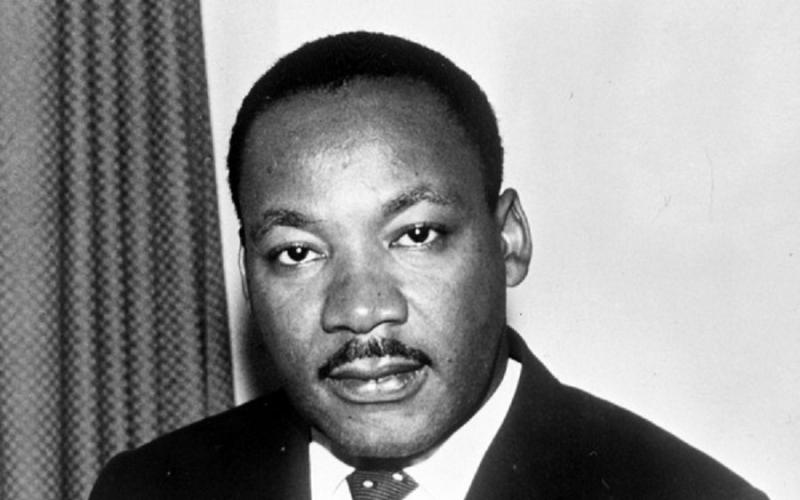 If Martin Luther King Jr. was among us today, it is safe to say he would oppose the wars in Yemen, Syria, Iraq and Afghanistan. He probably would attempt to broaden the anti-war movement to take an active role in the wars on the African continent. It is safe to say that King would be on the side of the movement for reparations.

“I imagine you already know that I am much more socialistic in my economic theory than capitalistic…” Martin Luther King Jr. said this in a letter to his future wife Coretta Scott on 18 July 1953.

While it could be argued that El-Hajj El-Shabazz (Malcolm X) aka Omowale was “Blacker” than Dr. King, a case can be made that King put two and two together before our Black Shining Prince. Comrade George Jackson implied this in a letter from Soledad prison to Angela Davis on 4 June 1970. Jackson wrote, “It is no coincidence that Malcolm X and M.L. King died when they did.  Malcolm X had just put it together (two and two). I seriously believe King knew all along but was holding out and presenting the truth in such a way that it would affect the most people situationally without getting them damaged by gunfire.”

“You remember what was on his lips when he died. Vietnam and economics, political economy… If what I said about M. L. King is true, and I am going to put it down as if I were positive that it is, he was really on our side (the billions of righteous) and his image can be used. (I mean we can use just that to claim him, and use his last statements and his image) … to strengthen ours. And Malcolm can also be “reformed”…I will be easy with it, slip it in like it was just common knowledge that King was a Maoist.”

Cornel West’s 2015 volume:  The Radical King talks about a man that imperialist America has attempted to take the sting out of his message. “This book unearths a radical King that we can no longer sanitise.”

King never claimed to be a Marxist but had read some Marx and was fiercely anti-capitalist. According to Stephen B. Oates historian and scholar, during the Christmas holidays of 1949, Dr. King spent his spare time reading Karl Marx.

He “carefully scrutinised” Das Kapital and The Communist Manifesto and several interpretive studies of Marx and Lenin. Marxism-Leninism clashed with his Christian worldview, however. Oates goes on to say that King, “thought Marx correct in much of his criticism in Das Kapital, which underscored for King the danger of constructing a system on the sole motive of profit.”

If King was among us today it is safe to say he would oppose the wars in Yemen, Syria, Iraq and Afghanistan. He probably would attempt to broaden the anti-war movement to take an active role in the wars on the African continent.

We know that he would chastise Western governments for their imperialist role in Haiti and other parts of the Caribbean. It is safe to say that King would be on the side of the movement for reparations.

Remember, he hinted at this in his “I Have a Dream” speech. “It is obvious today that America has defaulted on this promissory note, insofar as her citizens of colour are concerned. Instead of honouring this sacred obligation, America has given the Negros people a bad cheque, a cheque that has come back marked “insufficient funds.”

While King spoke for Africans at home and abroad he also supported the liberation of all oppressed people. One of my favourite quotes from Dr. King is: “Injustice anywhere is a threat to justice everywhere.”

Dr. King delivered his most famous “I Have a Dream” speech on 28 August 1963 at the March on Washington D.C. By 4 April 1967, he was singing a different song. Dr. King’s dream moved closer to El-Hajj Malik El Shabazz (Malcolm X’s) nightmare.

The Nation of Islam’s leader, Minister Louis Farrakhan, was guaranteed a laugh every time he spoke of Dr. Martin Luther King’s “I Have a Dream” speech. “Don’t you know that a man who has a dream is asleep?” he would say.

The corporate press had frozen Dr. King in 1963. The progressive movements in the United States and around the world however, have brought to light how King’s position shifted to the left.

By the time of his assassination on 4 April 1968, King was opposing the war in Vietnam and supporting struggling sanitation workers in Memphis, Tennessee. Contrary to popular belief, King was not the first African leader born in America to oppose the war. Malcolm X was. Malcolm X was followed by RAM, SNCC, and JOMO, which spoke out before King.

There are many facts about King’s life that are not widely known to today’s African youth. One example is that he visited Africa before Malcolm X and Elijah Muhammad. Kwame Nkrumah invited King to Ghana’s independence celebration on 6 March 1957. Malcolm X’s first visit to Africa was in Egypt in 1959.

King was light years ahead of his contemporaries on the South African question. It must be understood that the masses of Africans in the Western Hemisphere re-embraced Pan-Africanism in the 1970s.

President of the African National Congress, Chief Albert Lutuli—won the Noble Peace Prize in 1960—and Dr. King wrote an “Appeal for Action Against Apartheid” in 1962.

In Jamaica King paid tribute to Marcus Garvey. King had a special relationship with Jamaica. It must never be forgotten that Kingston, Jamaica and Atlanta, Georgia were twin cities at one point during the 1960s. Several of his books were written in Jamaica. In 1965, King spoke in Kingston. While in Kingston he visited Marcus Mosiah Garvey’s grave and paid tribute to the great African nationalist.

My comrade, Milton Blake (former host of the Musical Triangle who joined the ancestors ten years ago on 17 October 2007) told me that when King spoke in Jamaica he (Blake) was nursing a broken leg. He heard the speech on the radio and later read it in the local press. He memorised the speech and at a CKLN FM 88.1 fundraising drive, he recited some of it for of his listeners.

Following that address, King dropped in unexpectedly, to the pleasure of all 500 present, at a reception at home of the USAID director. The following day, he visited the grave of National Hero Marcus Garvey to lay a wreath out of respect for a man he said, gave Africans in the US a sense of dignity, a “sense of personhood, a sense of manhood, a sense of somebodiness”.

King’s relationship with revolutionary Africa has been obscured. He had a two-hour meeting with Ahmed Ben Bella of Algeria in 1962. He wrote an article about it in the 27 October 1962 edition on the New York Amsterdam News. King wrote: “For almost two hours Mr. Ben Bella and I discussed issues ranging from the efficacy of non-violence to the Cuban crisis. However, it was on the question of racial injustice that we spent most of our time.” The Drum Major for Justice was thoroughly impressed with Ben Bella’s knowledge of our struggle in the wilderness of North America… He continued: “As I sat talking with Mr. Ben Bella he displayed again and again an intimate knowledge of the Negro struggle here in America.”

King was on the right side of history and supported Africans and all oppressed people. Says West: “The radical King was a democratic socialist who sided with poor and working people in the class struggle taking place in capitalist societies. . . . The response of the radical King to our catastrophic moment can be put in one word: revolution—a revolution in our priorities, a re-evaluation of our values, a reinvigoration of our public life, and a fundamental transformation of our way of thinking and living that promotes a transfer of power from oligarchs and plutocrats to everyday people and ordinary citizens. . . . Could it be that we know so little of the radical King because such courage defies our market-driven world?”

The Black left has a duty to rescue M.L.K. and place him firmly in the Black Radical Tradition.

* Norman (Otis) Richmond aka Jalali is on Diasporic Music on Uhuru Radio every other Sunday from 2pm to 4pm, http://www.theburningspear.com/uhuru-radio