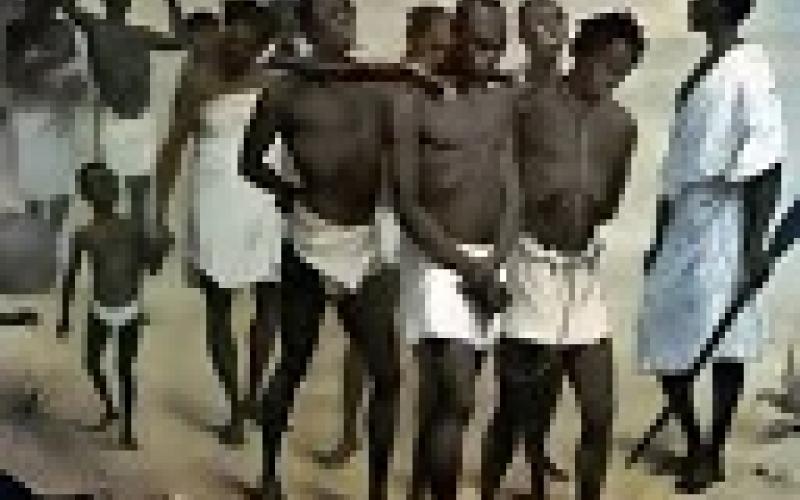 Would it not be both accurate and fair to acknowledge, and to designate, that there exists more than one ‘African diaspora’?

In late 2002, living in Nairobi, Kenya, my husband and I made what, for me, a descendant of Africa's slave trades, was a pilgrimage to Kenya's Indian Ocean coast. During our time in Kenya, we made about three trips to the coast. The very first visit, we went into Mombasa's Old Town to visit Fort Jesus, where unknown thousands of Africans were traded- by other Africans- to the Arabs, followed by the Portuguese.

Most of my adult life I have had to wonder why the world does not consciously, deliberately, include the Trans-Atlantic Slave Trade in its fundamental discussions of global migration and human trafficking. To me, it seems glaringly obvious that this ‘commerce’ (exactly what it was) must be included and accounted for, in proportion to what it was.

Instead, it is as if, somewhere, sometime, or repeatedly, whenever the ‘need’ arises, a tacit agreement has been made so that no matter its longevity, Earth-changing effects, or global scope, the Trans-Atlantic Slave Trade, the groups and people traded, and their direct descendants, today, never will these be allowed to fully assume their place as the unprecedented, forced human migration which it was.

I am an Afro-descendant - of the Americas, and, specifically, of North America and the USA. I'm a descendant of Africa's, Europe's, and Native America's diasporas in the United States, and earlier, in the North American, slavery- and genocide-based, trans-Atlantic white-settler colonies of Britain, the Netherlands, France, and Spain.

For nearly two decades now, I also live in Italy, in the heart of Mediterranean Europe. In 2001, after witnessing the marginalised status of Afro-descendant women of Central and South America and parts of the Caribbean and, later, seeing continental African (Nigerian) women who'd been trafficked to Italy, I wrote an article in which I tried to share what I'd lived and seen: ‘International trafficking in Black women “La africana” and “la mulata” out in the world: African women and women of African descent." (Originally published by LolaPress.org.)

Living in Nairobi in the early 2000s, I had the singular opportunity to share a phone call with my Mother's last surviving aunt. She was 88 years old and still living in the midwestern U.S. ‘heartland.’ This was a history-making conversation, as she recounted a family story which she, too, had been told, and one I have never heard from anyone else.

My great aunt revealed that one of our ancestors, reportedly, told other family members how, during the Trans-Atlantic Slave Trade, she, herself, was trafficked to the United States from her home in Africa- the island nation of Madagascar.

For me, this was, and remains, an astounding piece of information about my family's history, one part of our pre-slave trade African origins. Yet, I am still haunted by a question, unanswered after more than 150 years, of whether, in reality, any of this history of Africa truly matters to anyone in continental Africa.

All my life, I've lived a love affair with history and the globe. Yet, over time and through incongruous experience, I've been forced to come face-to-face with the unsettling fact that, on many levels, there still is no appropriate, commonly and internationally acknowledged ‘space’ for us who are the Afrodescendants of the Americas, nor for the Afrodescendants of the Middle and Near East, and South Asia- a scattering of ethnic peoples created by the Indian Ocean forced migrations out of Africa.

Instead, two major and distinct African diasporas seem to remain excluded from, and pretty much abandoned by, the current paradigms in operation, the current definitions - and 'blank' spaces- and collective concerns, of continental Africa, most of her people and leaders, and of most of the rest of the twenty-first century, post-modern (late-modern?) world.

* Marian Douglas-Ungaro is a U.S. Afrodescendant writer, and founder of Afroamericas, a network for the slavery-descendant Black people of the Americas. She believes the International Decade for People of African Descent: 2015-2024 will be an enormous learning opportunity, and eagerly awaits her next chance to come back to Africa.